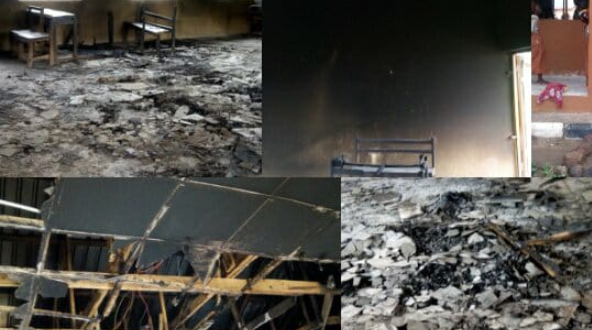 According to reports, the government girls secondary school, Sarkin Noma and Lokongoma Secondary School in Lokoja local government area of Kogi state, due for inauguration this morning has been razed down and vandalized by yet to be identified hoodlums.

The renovation of the schools were facilitated by Senator Dino Melaye, were set for inauguration this morning. The schools were razed down and vandalized by yet to be identified hoodlums over the night by fire.

The projects are among sixty nine the Senator had arranged for inauguration as part of his three year stewardship.

Meanwhile, yesterday, some unidentified political thugs warned senator Melaye not to enter Kogi State or else he will be attacked.

The political thugs who made their intention known through an unsigned pamphlet distributed yesterday at the naming ceremony of the child of the Lokoja administrator, Hon. Shiru Lawal, said Kogi State was a no go area for the Senator

The pamphlet read thus, “Dino don’t patronize Kogi.“Stay away else, you have yourself to blame. Save yourself and remain where you are, keep off from our land.

“Dino come and reap what you sowed, you don’t respect our leaders so we don’t respect you. Respect is reciprocal. “Take what you get if you dare us expect the worse, we warn you.”