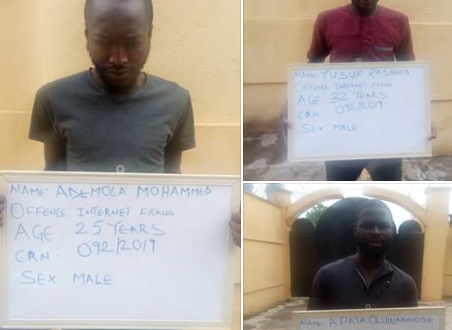 The Ilorin Zonal Office of the Economic and Financial Crimes Commission, EFCC, has secured the conviction of three persons charged before Justice Sikiru Oyinloye of a Kwara State High Court for offences bordering on internet fraud.

A statement from the agency says the convicts, Apata Oluwakayode, Yusuf Rasheed and Muhammed Ademola pleaded “guilty” to the one-count charge preferred against them by the EFCC.

They had approached the EFCC for a plea bargain agreement, after realizing the weight of evidence gathered against them.

Based on their guilty plea, Justice Oyinloye convicted them accordingly and sentenced them to six months in prison commencing from July 9, 2019.

The Court further ordered them to forfeit items recovered from them including, an HP laptop, and mobile phones, among others. They were also ordered to take an undertaking to be of good behaviour and never to be involved in any form of fraud within and outside the shores of Nigeria.

The convicts are currently serving their jail terms at the Madala Prison in Ilorin.

Charles Igbinidu is a Public Relations practitioner in Lagos, Nigeria
@https://twitter.com/ionigeria
Previous Money ritual: 63 female panties discovered in graveyard
Next Beyonce and Blue-Ivy turn up in matching mother-daughter outfit at the premier of ‘Lion King’ (Photos)