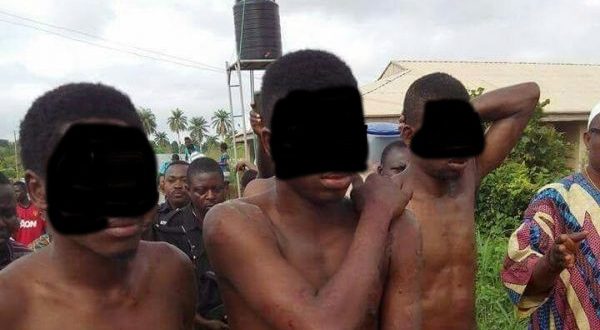 The teenagers aged: 16, 16 and 14-years were docked at a Tinubu Chief Magistrates Court which also doubles as a Family Court.

They are facing a four-count charge bordering on conspiracy, unlawful canal knowledge, sexual assault and defilement.

The chief magistrate, Mr Tajudeen Elias, ordered that the boys be remanded at Borstal Training Institution in Adigbe, Abeokuta, pending the receipt of legal advice from the Department of Public Prosecutions (DPPs).

The prosecutor, Sgt. Hafsat Ajibode, told the court that the boys committed the offences in July 2018 at Makoko Area of Lagos State.

She said that the boys gang-defiled their 15-year-old classmate at her resident.

“The boys claimed that they came to visit their female classmate at her house while her parents were not around.

“They offered her a drink which was suspected to contain some sleeping pills and that was the last the girl remembered when she became conscious.

“When she regained consciousness, she discovered that she was naked and bleeding while the boys had disappeared.

“She raised an alarm which led to the arrest of the accused.

“The girl has since been traumatised and hospitalized as a result of the incident,” she said.

The case was adjourned until Jan.16 for mention.

The News Agency of Nigeria (NAN) reports that Borstal Training Institution is where juvenile offenders are remanded.

There, they would receive both educational and vocational trainings aimed at rehabilitating and reforming them before they would be reintegrated into the society.

Charles Igbinidu is a Public Relations practitioner in Lagos, Nigeria
@https://twitter.com/ionigeria
Previous Father of Boko Haram Commander begs son to surrender
Next First man to give birth in UK warns others not to try it because it’s ‘really hard’