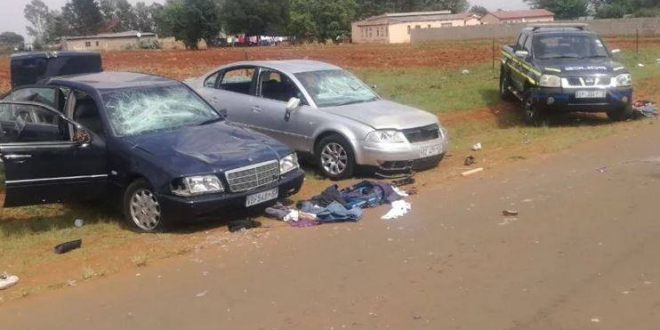 Pandemonium broke out on Thursday as two brothers took their rivalry over church leadership to another level.

About three people were injured and 12 cars damaged during the heated fight this morning at the church in Zuurbekom, Randfontein, South Africa.

It was gathered that supporters of the two brothers clashed over who should be the rightful leader of the church.

Speaking to Daily Sun, cops spokesman Captain Mavela Mason confirmed that the shooting at the International Pentecostal Holiness church (IPCH) was due to a rivalry between two brothers.

He said that at the moment, he can only confirm that three people were injured.

One was shot and two jumped out of a moving vehicle while it was being stoned.

“At this point no deaths have been reported and there has been no arrests at this point. We have confiscated pistols that were used in the shootout,” said Masondo.