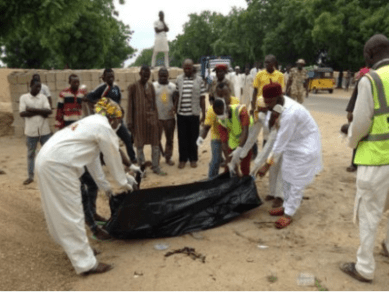 The National Emergency Management Agency, NEMA, has confirmed the death of three suicide bombers at Muna area of Maiduguri in an attempt to infiltrate the town in Friday.

Four powerful explosions occurred between 9: 00 and 9: 30 pm, sending terrifying echoes to many parts of the town.

NEMA’s Northeast Zonal Coordinator, Bashir Garga, who confirmed the incident, said that the blast occurred outside the town.

Garga disclosed that the suicide bombers detonated Improvised Explosive Devices (IEDs) strapped to their bodies behind the security trench at Muna Garage area in the outskirts of Maiduguri.

He said that terrifying echoes by the explosions caused some residents of the area to flee which made them to sustain injuries.

Garga added that the wounded were referred to hospital for treatment in Maiduguri.

“Details on the incident is still sketchy. It occurred behind the trenches and only the suicide bombers were killed,” he said, adding that normalcy has been restored to the area.

Muna garage is prone to suicide bomb attacks and the military had imposed a dusk to dawn curfew to secure the area.