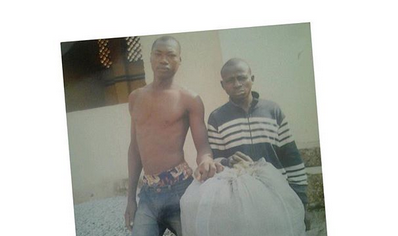 We Are Thieves Not Armed Robbers, Suspects Correct Magistrate

Two convicted criminals, Akeem Jimoh and Rafiu Afolayan have protested before a Lagos court after they were referred to as robbers, by clarifying that they were only thieves.


The suspects claimed that they don’t use violence to rob people, rather, they move at night, break shops and steal valuables.

Afolayan revealed that when they visit any shop and the owner is still present, they would quietly leave.

Before being caught they were said to have broken a shop belonging to one Mrs. Lolade Alanga in Oshodi, and stolen wares valued at N3m. The suspects were caught on their way to sell the items at the Aswani market.

They were later charged before Isolo Magistrates court for conspiracy and stealing. The Presiding Magistrate, Mrs. A.O. Teluwo found them guilty and sentenced them to one year imprisonment without an option of fine.

It was while they were waiting to be taken to the prison to serve their sentence that they protested in the open court that they were mere thieves and not armed robbers as referred to.