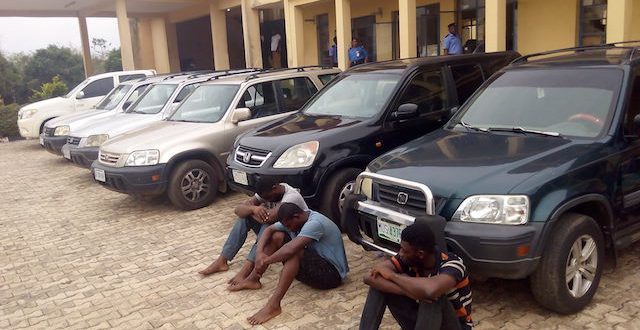 There Is Nothing Wrong In Stealing, Selling Cars For N50,000 – Suspect

Police in Ondo State Police have arrested a three-man gang, who specialised in stealing Honda Sport Utility Vehicles (SUV) in different parts of the state.
The suspects, Fadamitan Desmond, Olayemi Adeoye and Imafidon Roland, said there was nothing wrong in stealing and selling cars. The gang members have a special key, which they used in igniting the vehicles’ engines, before moving them from where they were parked.

Adeoye, the prime suspect, told our correspondent that he bought the master key purposely to unlock and steal cars parked at market places. He confessed that he sell each of their stolen vehicles for a paltry sum of N50,000. According to him, he usually sells the cars to Desmond and Roland.

He said: “Anytime I identify a vehicle, which I wish to steal, I would go to the area with my special key. I will take the car to Desmond and he would give me N50,000.”