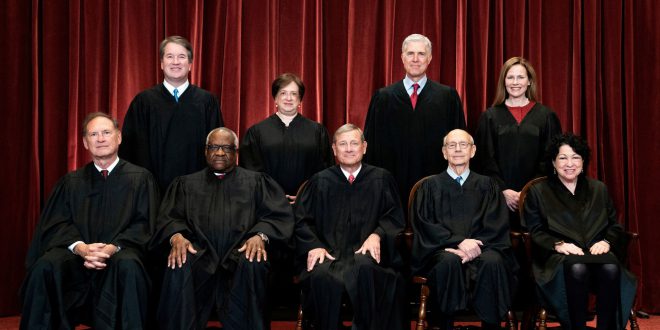 The constitutional right to choose abortion for tens of millions of women in America has been overturned by a group of nine people in Washington DC.

Friday’s historic ruling by the US Supreme Court overturns the 1973 ruling known as Roe v Wade and sends shockwaves through the country, with many states already having laws in place ready to effectively ban abortion.

It puts the court at odds with a majority of Americans who favoured preserving Roe, according to opinion polls, though some crowds also gathered outside the building on Friday to celebrate the decision.

It also throws the power of the court into sharp focus, an issue that has been in the spotlight in recent years after former president Donald Trump was able to profoundly alter its political leanings with three appointments.

Supreme Court justices are picked by the president to lifetime appointments, meaning that the choice of a single member – let alone three in just over three years – can have consequences for decades to come.

So who are the nine members of the US Supreme Court, and what did they say in today’s 5-4 ruling?

It was Justice Samuel Alito who delivered the opinion of the court.

“Abortion presents a profound moral issue on which Americans hold sharply conflicting views,” he says in his opening statement.

He wrote that Roe and Planned Parenthood v. Casey, the 1992 decision that reaffirmed the right to abortion, were wrong the day they were decided and must be overturned.

“We therefore hold that the Constitution does not confer a right to abortion. Roe and Casey must be overruled, and the authority to regulate abortion must be returned to the people and their elected representatives.”

Charles Igbinidu is a Public Relations practitioner in Lagos, Nigeria
@https://twitter.com/ionigeria
Previous Romelu Lukaku is latest victim of Chelsea’s curse of No9 shirt after Higuain, Morata and Torres, but who will be next?
Next 2023: ‘Unknown Persons’ Stole My Academic Certificates, Tinubu Tells INEC