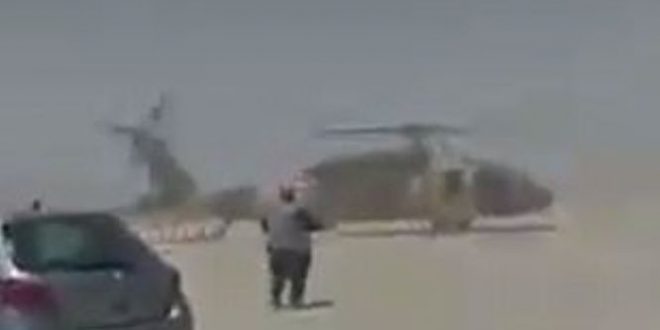 The Taliban take a captured $6m US-made Blackhawk helicopter for a joyride … but can’t get it off the ground after seizing 200,000 firearms & 20,000 Humvees

The Taliban have taken a captured US Black Hawk chopper for a joyride – but couldn’t get the aircraft off the ground.

It’s reported the militants have made off with up to £13bn worth of abandoned weapons and vehicles, including 200,000 firearms and 20,000 Humvees seized from the Afghan army.

The fanatics have now begun parading in their captured equipment and uniforms after seizing power.

US intelligence officials fear that there are around 150 helicopters and planes for Taliban insurgents to use, including 45 UH-60 Black Hawk choppers.

The chopper taxied on the tarmac but the Taliban were unable to get it into the air.

It remains unknown if the militants have been trained to fly the helicopter or who was at the controls.

More than 200,000 firearms were donated to the Afghan army, including M24 snipers and assault weapons, according to a Department of Defense report.

The US has also funded more than 20,000 humvees and 40,000 light tactical vehicles, including Ford pickup trucks, to Afghan defence forces.

Afghan troops were also given around 1,000 wrecker trucks including hundreds of Mine Resistant Ambush Protected vehicles.

It comes after pictures released by the propaganda arm of the Taliban showed their fighters armed with American guns and riding in US armoured vehicles.

Fighters from the Badri 313 special forces unit appear to treat their stolen US equipment as trophies having seized them from the retreating Afghan army as they stormed towards Kabul.

Militants painted the slogan “Victorious Force” on the side of a US-made M1117 armoured transport – thought to be worth around $800,000.

Insurgents appeared to cradle US-made M4A1 carbines, thought to be worth around $700 each, in their arms.

The new “Victory Force” unit is the latest brazen taunt to the US whose muddled withdrawal from Afghanistan has been credited with handing power back to the Taliban.

The consequence of the rapid pullout led to the collapse of the Afghan army and handed billions of pounds worth of equipment to the Taliban as they raided weapons caches.

Everything that hasn’t been destroyed is the Taliban’s now

The US has spent an estimated £13billion arming and equipping the Afghan army since 2005 – and officials have admitted that anything which was left behind and not destroyed is now in the hands of the Taliban.

Many of these weapons were simply abandoned or even handed over as the Afghan forces collapsed – sometimes with a fight – against the advance of the Taliban.

Planes, heavy armour, and high-tech equipment were removed but weaponry that had been given to the Afghan army was left behind.

“Everything that hasn’t been destroyed is the Taliban’s now,” one U.S. official told Reuters.

And it is feared some of the weapons could fall into the hands of splinter terrorist groups – such as ISIS – or even Russia and China.

Getting an exact accounting of all the weapons in Afghanistan after almost 20 years of constant war is very difficult – but according to a 2017 official US report there could be as much as:

Elias Yousif, deputy director of the Center for International Policy’s Security Assistance Monitor, told The Hill: “When an armed group gets their hands on American-made weaponry, it’s sort of a status symbol. It’s a psychological win.

“Clearly, this is an indictment of the U.S. security cooperation enterprise broadly.

“It really should raise a lot of concerns about what is the wider enterprise that is going on every single day, whether that’s in the Middle East, Sub-Saharan Africa, East Asia.”

Taliban forces have banned Afghans from Kabul airport after refusing to extend the withdrawal deadline for Western forces.

Thousands of people are attempting to flee Afghanistan as they try to escape the Taliban’s ruthless rule – with fears of mass executions, torture, reprisals, and oppression.

Taliban spokesman Zabihullah Mujahid said no evacuation flights from Afghanistan will be allowed after August 31 – and warned any delay would shatter the uneasy truce at the airport and risk slipping back into war.

Terror chiefs have previously warned “there will be consequences” if the Western forces cross the “red line” and don’t leave on time.

And Mujahid confirmed at a press conference today: “August 31 is the time given and after that it’s something that is against the agreement.

“All people should be removed prior to that date. After that we do not allow them, it will not be allowed in our country, we will take a different stance.”

He said Afghan nationals will no longer be allowed to go to Kabul airport and warned the terror group are “not in favour” of letting Afghans leave the country.

Countries have evacuated nearly 60,000 people over the past 10 days and troops are desperately trying to meet the deadline agreed with the Taliban for the withdrawal of foreign forces.

The White House has reiterated that the rescue operation will not be extended beyond the end of the month.

The UK’s Defence Secretary Ben Wallace said the evacuation effort is “down to hours now, not weeks” as he conceded the UK’s involvement will end when the US leaves.