The Oluwo of Iwoland set to marry Kano Princess, denies requesting N20m from Osun State Governor for the ceremony

Spread the love
he palace of the Oluwo of Iwoland says Oba Abdulrosheed Adewale Akanbi did not request N20m from Osun State Governor Gboyega Oyetola, for his forthcoming marriage to a daughter of the Emir of Kano, Ado Bayero.

A letter had been in circulation on social media on Friday purportedly from the palace of Oluwo of Iwoland seeking financial assistance for the wedding.

A statement on Friday by the press secretary to Oluwo, Alli Ibrahim, said “We read with total dismay a letter purportedly said to emanate from the palace of Oluwo of Iwoland seeking financial assistance on his personal affairs, wedding.

“While we commend the enlightened public for their sense of fair judgement, we want to categorically state it that the letter is fake and did not emanate from the palace of Oluwo.

“The said letter lacks basic in-house styles of Oluwo’s palace correspondence. Oluwo always appends his personal signature while writing the government. Equally, the font in the letter is not our official style. At the said date on the letter, Oluwo was not in the state up till now.

“And his secretary has no audacity, whatsoever to sign on behalf of His Majesty while communicating with the government. The letter was orchestrated by mischievous people whose mission is to discredit the palace. Marriage is a personal affair. There is no marriage venture too big for Oluwo to finance on his own.

“Those circulating such should exercise caution. Queen is coming but not in haste of the public demand. We enjoin reasonable individuals to get their facts before jumping on the bandwagon.”

The palace of the Oluwo made the statement in reaction to a letter that has since gone viral online where it read that the monarch purportedly asked for N20m from the state to finance his wedding with a Kano princess. 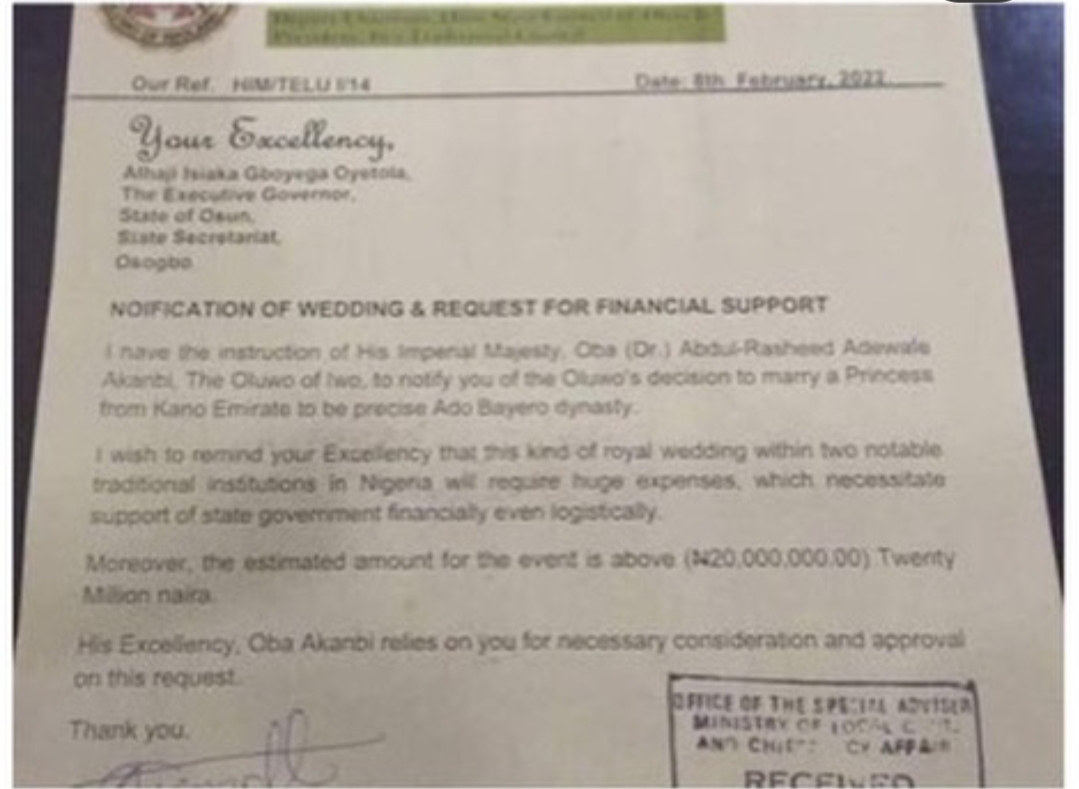 The letter dated February 8, 2022, addressed to Oyetola, was received on behalf of the governor, by the office of Special Adviser to the governor on Chieftaincy Affairs.

The letter read in parts, “I have the instruction of the His Imperial Majesty, Oba (Dr.) Abdulrosheed Adewale Akanbi, the Oluwo of Iwo, to notify you of Oluwo’s decision to marry a princess from Kano Emirate, to be precise, Ado Bayero Dynasty. I wish to remind your Excellency that this kind of royal wedding within two notable traditional institutions in Nigeria will require huge expenses, which necessitate the support of the state government financially, even logistically.”

Charles Igbinidu is a Public Relations practitioner in Lagos, Nigeria
@https://twitter.com/ionigeria
Previous Hushppupi: Police ordered to conclude investigation on Abba Kyari in two weeks
Next US government planning to use $7bn in frozen Afghan assets to compensate victims of the 9/11 attacks