Meghan Markle lectured about vaccine equity and how the wealthiest nations are hoarding vaccine doses from poor countries while wearing a $4,500 white designer dress and what appeared to be $16,500 Cartier earrings, a $12,000 Cartier watch and a $6,900 Cartier ‘love’ bracelet during Saturday’s ‘Wokestock’ in New York City.

The Duchess of Sussex has been seen wearing expensive designer jackets and long-sleeve clothing for most of the four-day ‘power trip’ to New York City – despite temperatures hovering in the mid 70s (Fahrenheit) – but she shed the layers for a white San Gallo Couture Mini Dress designed by Valentino.

She donned the dress, which sells on Harrod’s for  $4,516 (£3,300) for Saturday night’s event in New York City’s Central Park, where she and Prince Harry spoke about getting the COVID-19 vaccine to everyone around the world.

The website selling the dress says, ‘The gentle structure of the crepe silhouette is signature Valentino.’

‘Bringing endless versatility to your events edit, this Valentino dress is defined by its beaded embroidery and floral accents to the chest, sleeves and hem,’ according to the website.

‘Otherwise maintaining a decidedly pared-back shift profile which cuts just shy of the knees, it fastens at the reverse with a fuss-free concealed zip to allow for effortless dressing.’

She paired the dress with black heels and wore her hair in a low ponytail.

During Meghan and Harry’s joint, coordinated speech, Meghan said, ‘Every single person on this planet has a fundamental right to get this vaccine. That’s the point, but that’s not happening.

‘And while in this country and many others, you can go almost anywhere and get vaccinated, billions of people around the world cannot,’ she said.

‘This year, the world is expected to produce enough doses to meet the target of vaccinating 70 percent of people in every single country, but it is wrong that so much of the vaccine supply has only gone to 10 wealthy nations so far and not everyone else. It’s just not ok.’ 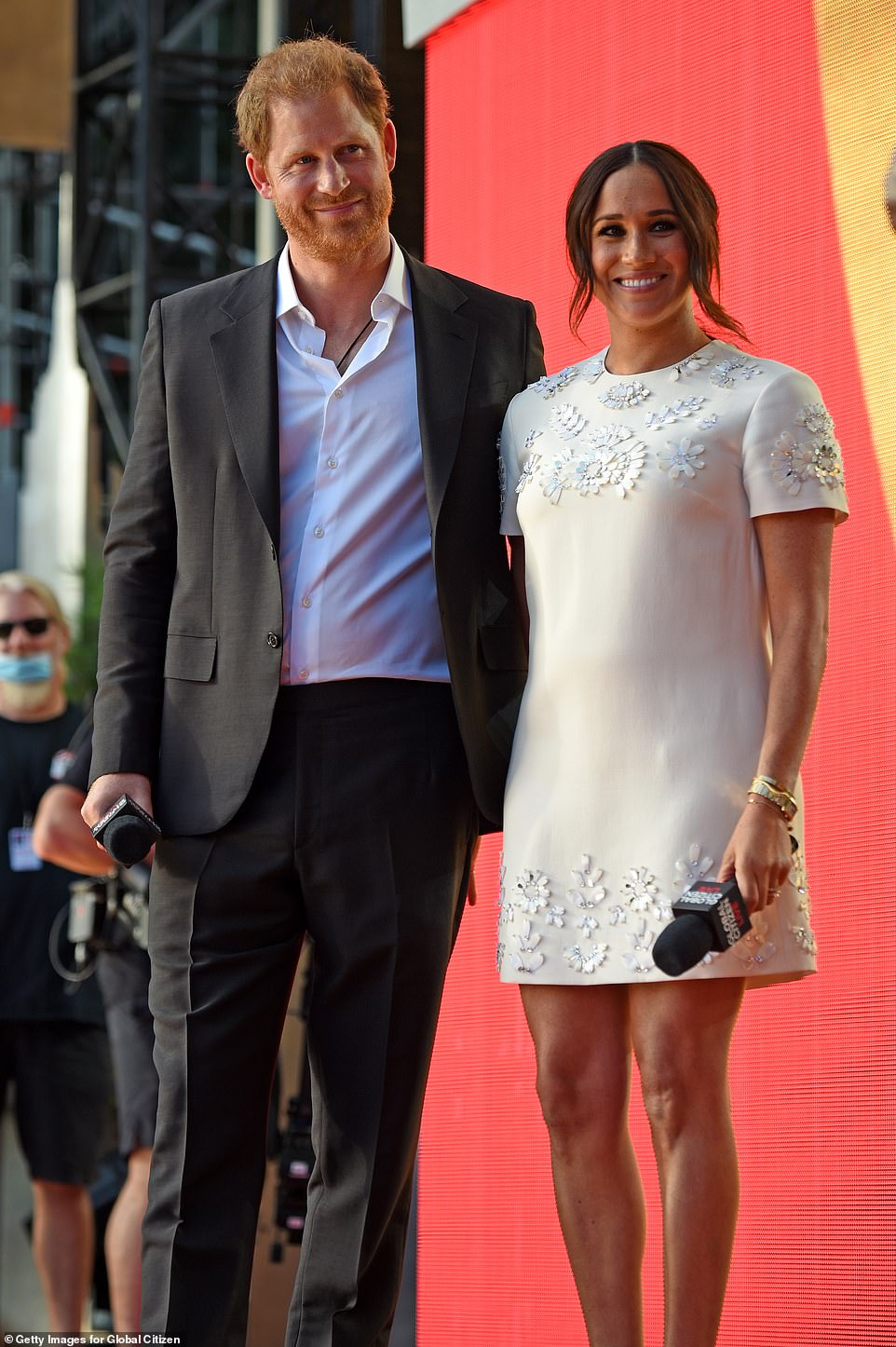 The white dress she wore on stage in Central Park on Saturday was Meghan’s latest outfit change.

Just three months after the birth of daughter Lilibet, the Sussexes left their baby and two-year-old son Archie at home in their $15.7 million Montecito mansion on Wednesday and swept into Manhattan.

Ex-Suits actress Meghan, 40, ditched her laid-back Californian vibe for what one onlooker called ‘a wardrobe fit for Succession‘ – referring to the hit show about a family locked in a bitter power struggle.

With sweeping convoys and police outriders bringing New York traffic to a halt, photo ops with the great and the good and just the right amount of posing with underprivileged children, the visit was topped off triumphantly last night. 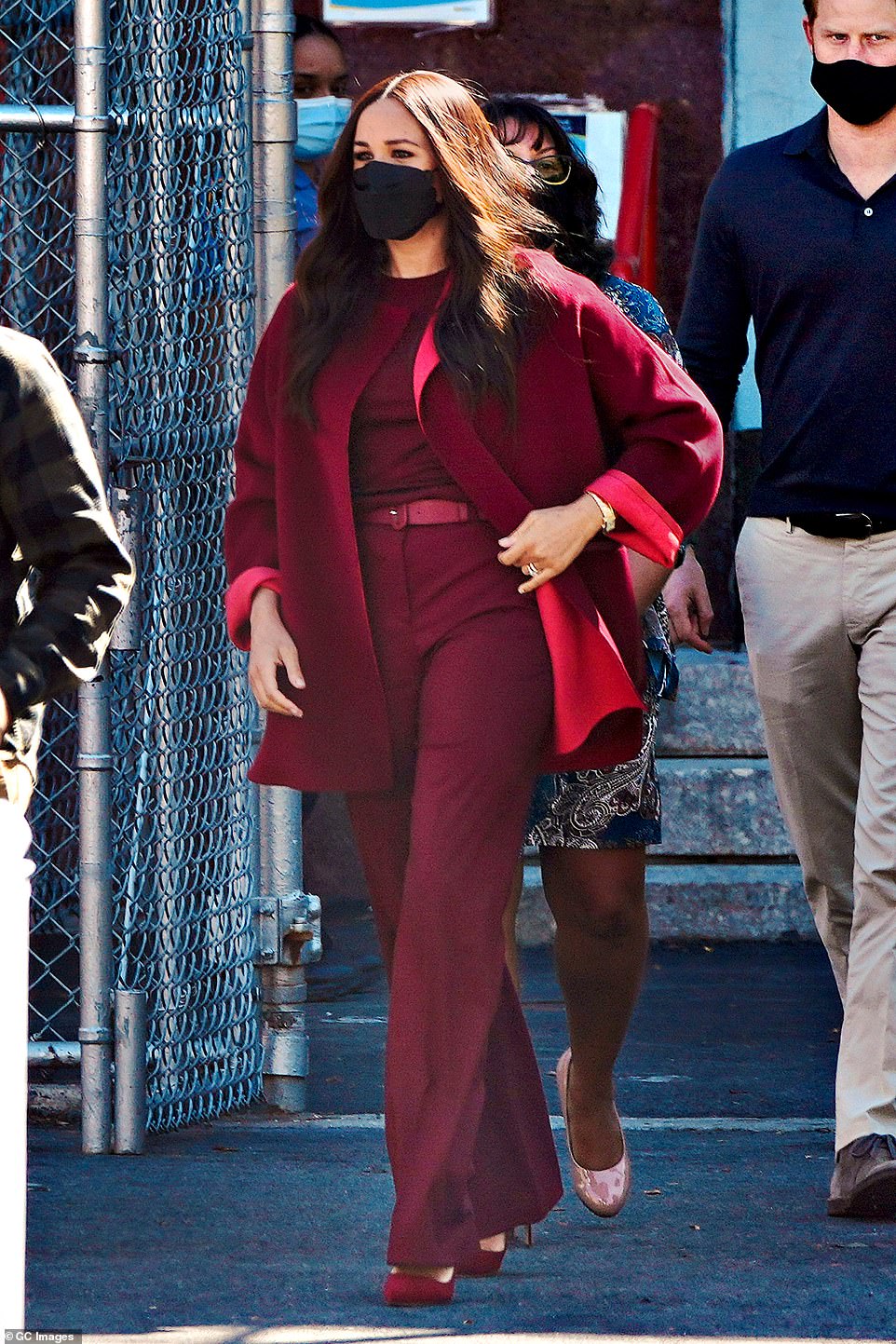 It seems that in America at least, the Duke and Duchess have no intention of fading away – let alone embracing the ‘privacy’ they once so desperately claimed to crave. Pictured, Loro Piana cashmere coat £3850, matching trousers £1300, Manolo Blahnick shoes £425, total £5575

The pair took to the stage in Central Park for Global Citizen Live, a concert aimed at raising awareness for a variety of issues, including global poverty and climate change. It has been dubbed ‘Wokestock’.

It seems that, in America at least, the Duke and Duchess have no intention of fading away – let alone embracing the ‘privacy’ they once so desperately claimed to crave.

MORE CHANGES THAN A BROADWAY PLAY

Former actress Meghan showed she intended to be taken seriously in a series of expensive power suits with towering heels which she is said to have ‘updated each day to ensure we didn’t get the same shot twice’.

She is believed to have travelled with her own hair and make-up team and carefully picked out her wardrobe with a stylist weeks in advance for ‘maximum impact’.

While some questioned why the duchess chose to wear heavy wool coats during an unseasonably warm week in New York where temperatures were a balmy 79F, Meghan was clearly all about the ‘optics’. 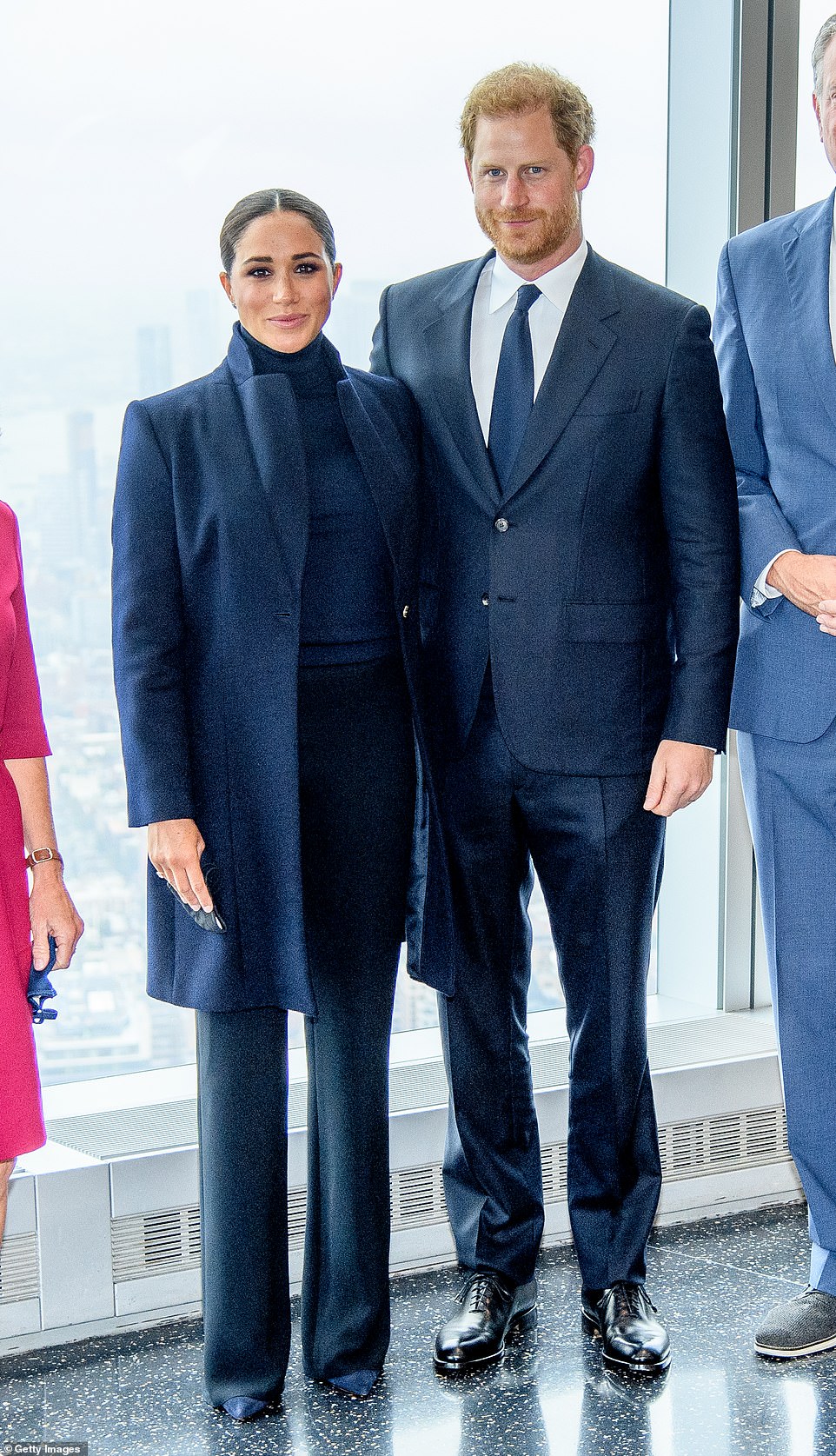 ‘She was here for business, whatever that business may be, and she dressed the part,’ one witness said.

Many times over. According to one New York photographer, the Sussexes had ‘more wardrobe changes than a Broadway play’.

She changed into a $4,379 Max Mara camel coat for her visit to the UN on Thursday (carrying a $3,421 Valextra ‘Iside’ bag) and then into a little black dress to meet Chelsea Clinton and others at the World Health Organization.

Public records show that 94 percent of the children at the school qualify for free meals.

For her second visit to the UN yesterday, she was back to an all-beige power suit costing $6,232, including a $5,588 Max Mara ‘Lilia cashmere coat and $643 Max Mara high-waisted camel wool trousers.

Harry, 37, meanwhile, sat crossed-legged on the floor as Meghan read her picture book The Bench (aimed at toddlers) to a group of seven-year-olds, many of whom were so overwhelmed by the visit that they touchingly broke down in tears as they hugged the pair goodbye.

The couple made not one, but two trips to the headquarters of the United Nations.

On Thursday, they met the American ambassador to the UN, Linda Thomas-Greenfield, who said they had had ‘important discussions’ about racial justice, Covid-19 and mental health awareness.

‘Boris Johnson got only one visit to the UN this week,’ said a witness. ‘They are clearly going for the whole ‘We’re so important we get multiple visits’ thing.’

Last night’s Global Citizen Live concert, at which stars including Coldplay, Jennifer Lopez and Billy Eilish were due to appear, boasted a ‘woke’, mostly vegetarian menu. There was no booze on sale, just designer water. 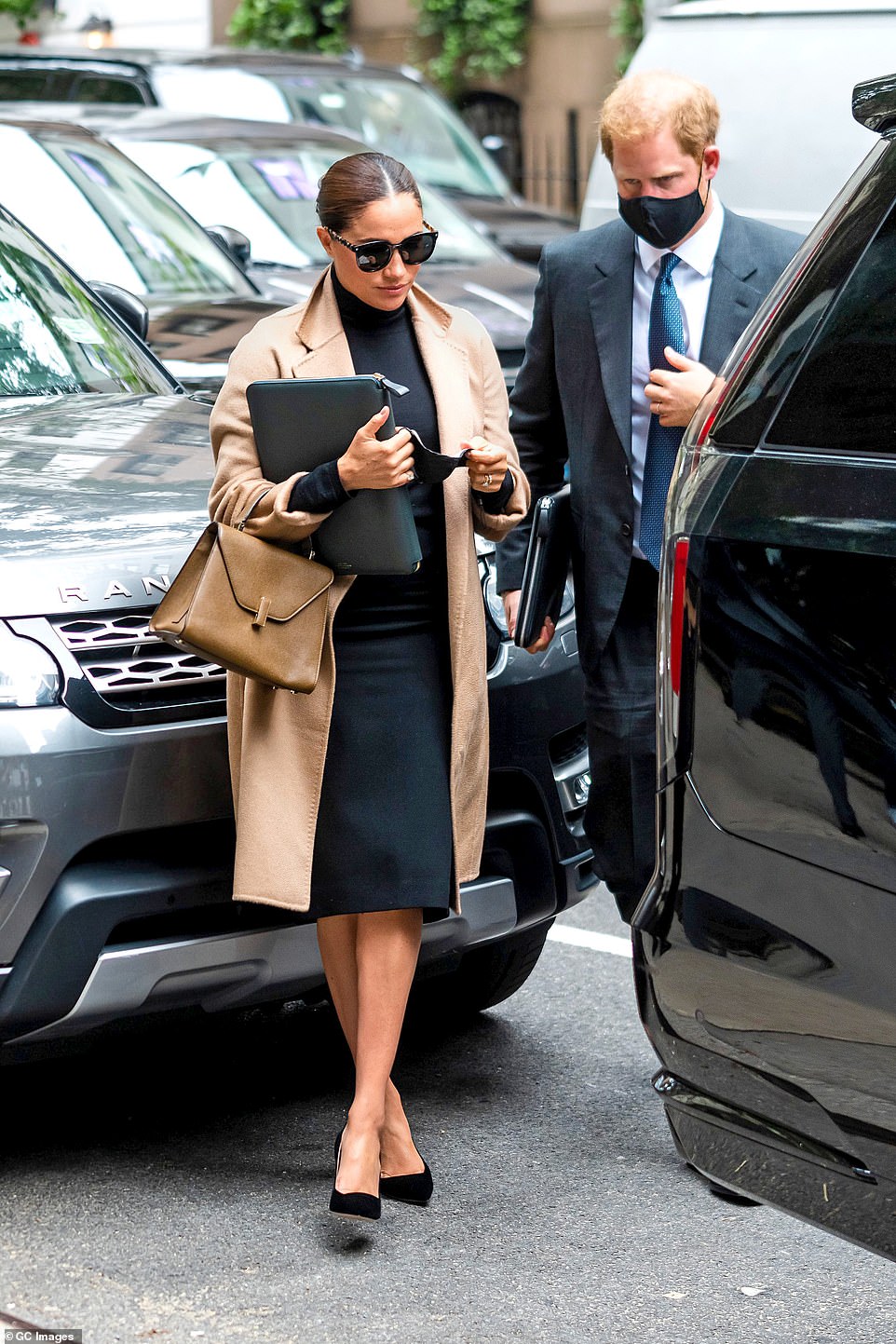 Meghan wore a $4,379 Max Mara camel coat for her visit to the UN on Thursday (carrying a $3,421 Valextra ‘Iside’ bag) and then into a little black dress to meet Chelsea Clinton and others at the World Health Organisation

HOW MEGHAN STOPPED THE TRAFFIC

Hard-to-impress New Yorkers have been wowed by the couple’s ‘presidential-style’ convoys and wall-of-steel security. Streets have been sealed off, police stopped the traffic and the World Trade Center, a national monument, was completely closed down for their visit.

One onlooker counted ten cars as their convoy swept up.

The security cordon around the pair, which comprises some 20 officials at any time, seemed to include their own private bodyguards, New York Police Department officers, agents from the Department of Homeland Security (usually only reserved for visiting heads of state) and private security staff.

‘They are travelling presidential style,’ said one witness.

‘They don’t have The Beast (the President’s bomb-proof limousine) but they have two Range Rovers with blacked-out windows. They always go in the first one with security and driver and then their flunkeys follow in a procession of large sports utility vehicles.

‘The convoy is like a state visit by a major head of state.

‘The NYPD outriders have been shutting down streets to allow them to pass. They have been going through red lights.’

One bodyguard for the Sussexes’ trip, an ex-New York cop called Jimmy, was recently identified by Rolling Stone magazine as having provided ‘Defcon-3 level’ security for the singer. The magazine claims that Jimmy lives in a $4.4 million flat across the hallway from Swift’s $19.2 million penthouse and is in charge of her security detail.

Meghan and Harry had at least two personal bodyguards with them at all times.

The pair were described as ‘short-haired and tough’ and witnesses said they ‘looked ex-military and one spoke with a British accent’.

They travelled everywhere with the couple and even sat at a table beside them in their hotel bar and as they enjoyed lunch at a soul food restaurant, jumping up every time anyone approached trying to take a photograph.

There were also two or three guards with earpieces and Department of Homeland Security badges on their lapels. 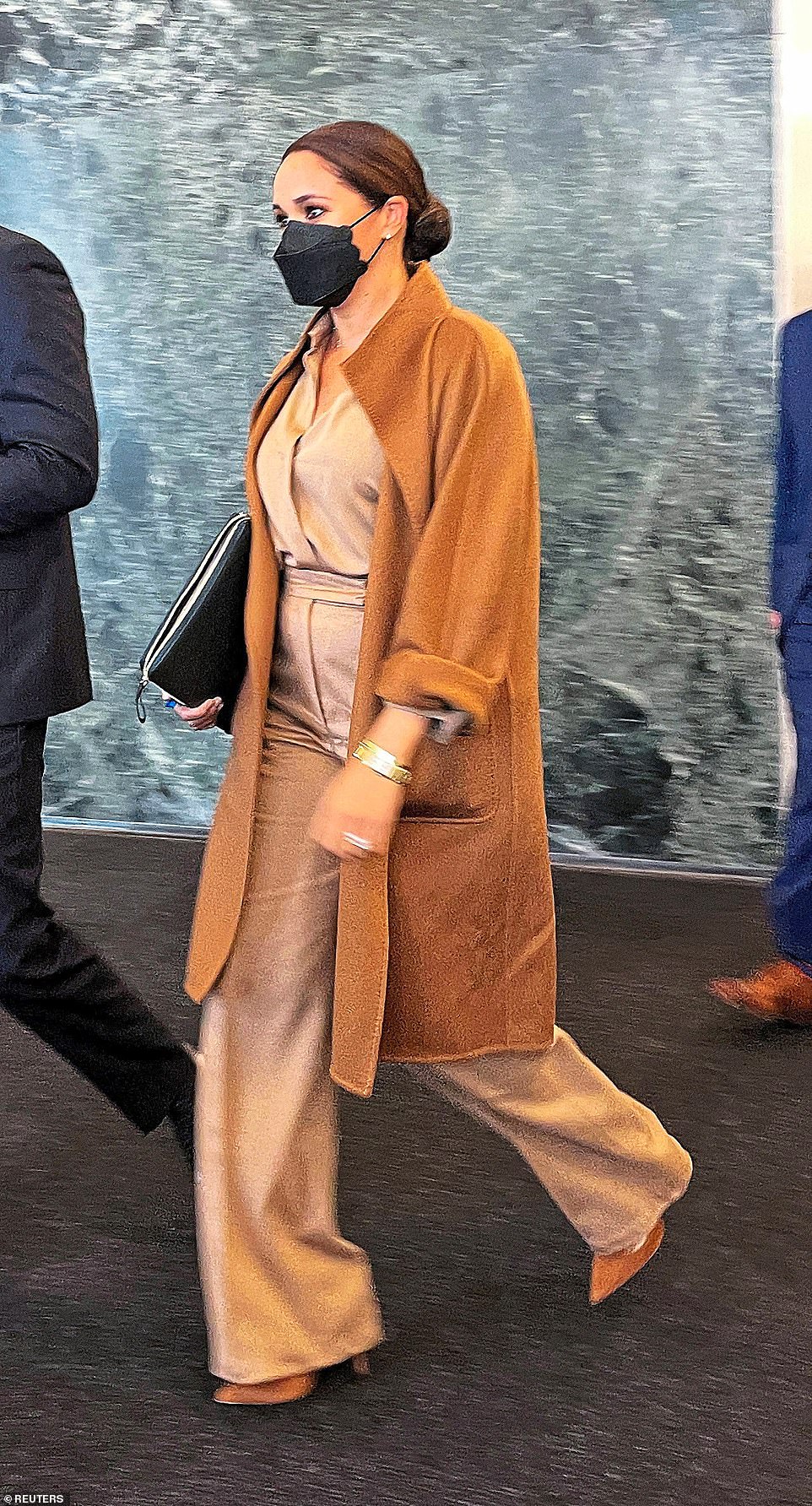 One prominent Democratic fundraiser said the couple’s schedule ‘ticked all the boxes’ for a ‘power trip’ to the City That Never Sleeps.

Then it was on to the United Nations and the World Health Organisation followed by a solo meeting for Harry.

Back at the hotel bar he was spotted ‘with some suits who looked like they were celebrating the end of a long day at some middle-market management conference,’ as one onlooker put it. After Friday morning’s photo opportunity at the Harlem school, they went on to Melba’s soul food restaurant for a traditional Southern meal of fried chicken, waffles, catfish with chipotle mayonnaise, black-eyed peas and collard greens.

Harry was overheard telling owner Melba Wilson how much he loves collard greens because they are a speciality of his mother-in-law, Doria Ragland.

When a fellow diner offered to pay for their meal – which is estimated to have cost around £48 – the offer was politely declined.

While at the restaurant, the couple made a ‘commitment’ to donate $25,000 to its employee relief fund to help workers suffering as a result of the pandemic.

A former football player, Holness has morphed into what one witness called a ‘Mini Me’.

‘She’s like Meghan’s shadow. She wears the same style of power suits, rarely takes off her Hollywood sunglasses and is always clutching bulging Archewell folders packed with briefing notes,’ said a source.

‘Even her hair is styled the same as Meghan’s.’

Other public relations aides have included representatives from Rubenstein, one of New York’s top PR outfits.

READY FOR OUR CLOSE-UP

Meghan and Harry’s personal photographer, Los Angeles-based Matt Sayles, was given special access inside each venue, taking carefully posed pictures with the couple and an endless succession of dignitaries.

A masked, suited man holding a video camera was also spotted as part of their entourage, prompting speculation that the couple were filming their jaunt to include in a ‘special’ for the streaming giant Netflix, with which they have a £100 million deal. 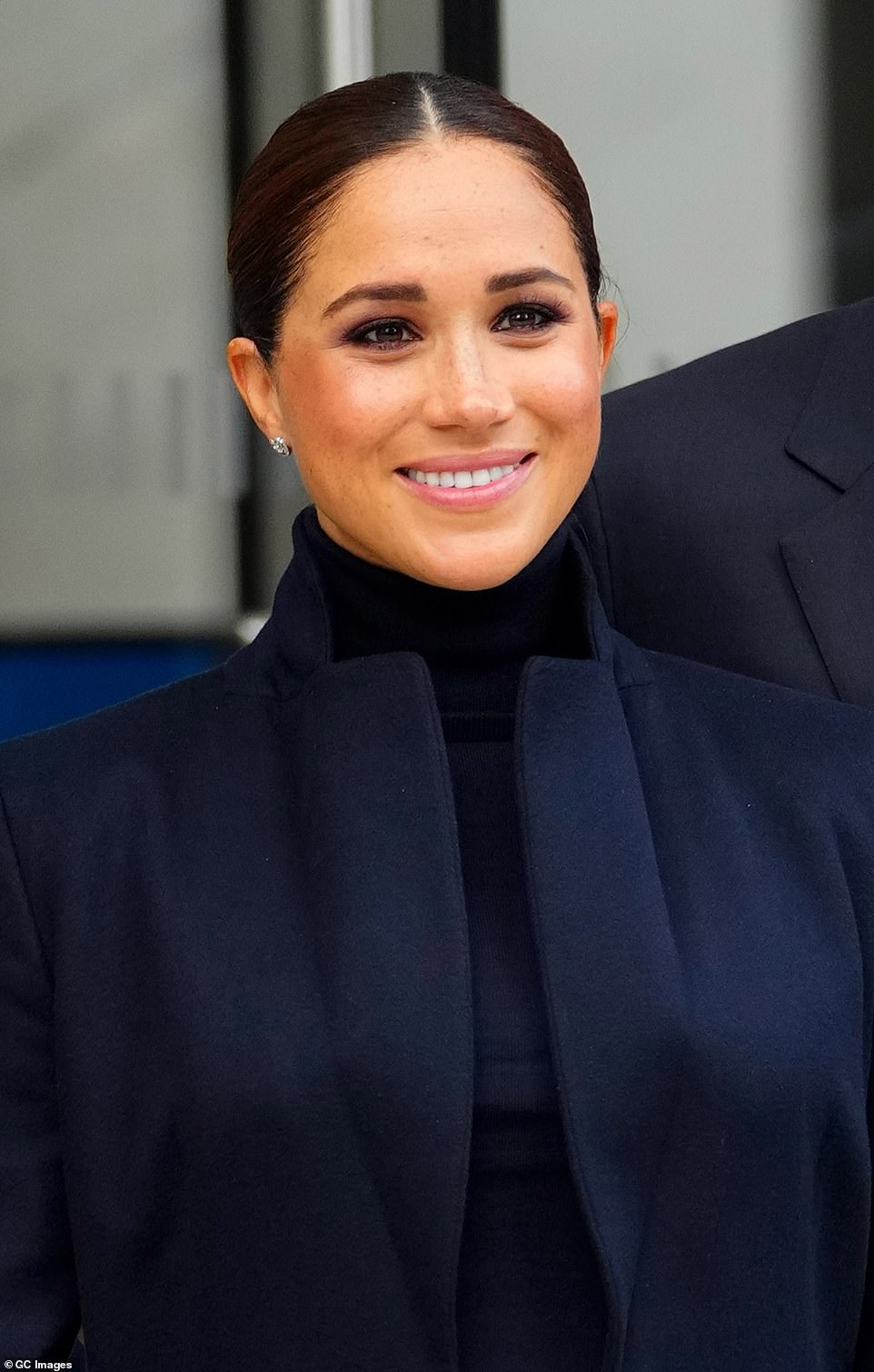 There has been much speculation about a $61,582 diamond pinky ring which Meghan has often worn, including on the recent Time magazine cover lauding the couple as global ‘influencers’.

While her publicity team initially denied the ring was made up of diamonds gifted by a mysterious Middle Eastern source, they later backtracked.

But they have refused to clarify where the stunning ‘pinky diamond’ – which comes with a matching set of equally-sunning earrings – came from.

Meghan was spotted wearing the ring on the first day of her trip – but since then it has not been seen.

However, she was still adorned with an estimated to be more than $300,000 worth of jewels, including a gold Cartier tank watch that belonged to Princess Diana, her gold Cartier ‘love’ bracelets and her engagement ring, wedding ring and diamond-encrusted eternity ring – all gifts from her adoring husband.

The Sussexes were believed to be occupying one of the main suites, which costs around $8,800 a night and enjoys sweeping views over Central Park.

One woman who sat opposite their red-leather booth told how two security guards sat on the next table and rebuffed anyone who tried to take pictures.

Harry, on the other hand, ‘had very few responses’.

‘Harry got bored and started looking at his phone,’ the hotel source claimed.

‘Then he got back into the conversation and then he lost it again and went back to his phone.’

Harry is said to have ordered a plate of hamburger sliders during the evening.