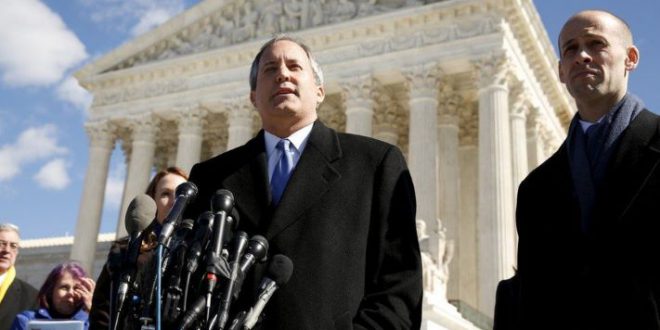 Ten US states, led by Texas, are suing Google, accusing it of taking illegal steps to preserve its monopoly over the online advertising market.

The lawsuit is led by Texas Attorney General Ken Paxton (R), who was joined by Arkansas, Indiana, Kentucky, Missouri, Mississippi, South Dakota, North Dakota, Utah and Idaho. All of the states have GOP attorneys general.

“This Goliath of a company is using its power to manipulate the market, destroy competition and harm you, the consumer,” Paxton said in a video posted on Twitter.

“It isn’t fair that Google effectively eliminated its competition and crowned itself the head of online advertising,” he said.

This internet Goliath used its power to manipulate the market, destroy competition, and harm YOU, the consumer. Stay tuned… pic.twitter.com/fdEVEWQb0e

The 118 page lawsuit alleges that Google used its market power to unlawfully box-out competitors in the ad tech space.

It highlights Google’s acquisition of DoubleClick in 2008 as the point where the company started using its position to gain leverage against publishers and ad exchanges.

“Within a few short years of executing this unlawful tactic, Google successfully monopolized the publisher ad server market and grew its ad exchange to number one, despite having entered those two markets much later than the competition,” the suit reads.

The complaint also says that Google uses its market power to extract a tax from ad spending that ultimately hurts American consumers through higher prices and lower quality.

A spokesperson for Google pushed back on the suit’s claims, pointing out that digital ad prices and ad tech fees have fallen in the time that the company was allegedly monopolizing the market.

“Attorney General Paxton’s ad tech claims are meritless, yet he’s gone ahead in spite of all the facts,” the spokesperson told The Hill. “We’ve invested in state-of-the-art ad tech services that help businesses and benefit consumers. … We will strongly defend ourselves from his baseless claims in court.”

At one point the complaint alleges that Google had reached an agreement with Facebook to limit the social media platform’s efforts to compete with Google for ad dollars. The Hill has reached out to Facebook for comment.

The states are asking the court for “structural, behavioral, and monetary relief” to stop Google from abusing monopoly power.

The lawsuit adds to a heap of investigations into America’s biggest tech companies.

Google, in particular, was sued by the Department of Justice earlier this year over its search policies.

A separate group of attorneys general are also expected to file a case soon focused on Google’s power in the online search market.