Yemini terrorists launched a missile strike on an oil depot just moments from where the world’s best drivers were completing a practice session ahead of Sunday’s Saudi Arabia Grand Prix.

F1 stars Lewis Hamilton, Max Verstappen and Charles Leclerc were forced to stop practice session at the Jeddah track when Iran-backed Houthis fired missles into the North Jeddah Bulk Plant, which is just 12 miles south-east of the circuit.

The attack was the second on the fuel depot in recent days, and prompted an explosion so intense it was detected on Ferrari driver Carlos Sainz’s dashcam.

Drivers halted the start of the second practice session for 15 minutes to hold emergency talks with Formula One president Stefano Domenicali about whether the race would go ahead.

Dutch star Max Verstappen even asked his team if his Red Bull car was on fire as smoke from the blaze billowed across the track.

The North Jeddah Bulk Plant is also near the city’s international airport, which is a crucial hub for Muslim pilgrims heading to Mecca.

This is just the second Saudi Arabian Grand Prix to take place and there have been some concerns about the race going ahead give the attacks on the kingdom.

The Saudi Arabian Oil Co., known as Saudi Aramco, did not immediately respond to a request for comment about the attack.

The attacks come as Saudi Arabia still leads a coalition battling the Iran-backed Houthis, who seized Yemen’s capital of Sanaa in September 2014.

The kingdom, which entered the war in Yemen in 2015, has been internationally criticised for its airstrikes killing that have killed scores of civilians – something the Houthis point to as they launch drones, missiles and mortars into the kingdom.

Those at the F1 track could see the large black smoke cloud in the distance. The cause of the blaze was not immediately known.

Verstappen was heard speaking to his team and asked: ‘I can smell burning.. is it my car?’ 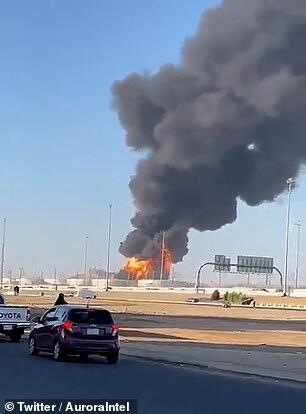 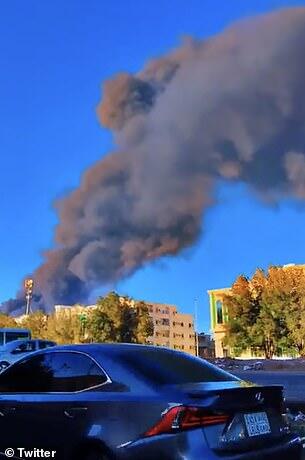 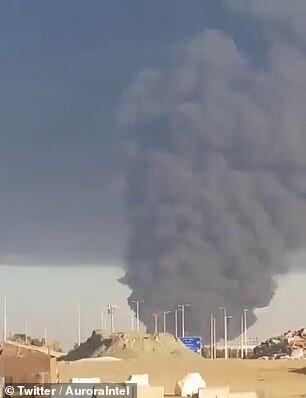 The F1 said in a statement that: ‘The position at the moment is that we are waiting for further information from the authorities on what has happened.’ The F1 did not elaborate.

However, the al-Masirah satellite news channel run by Yemen’s Houthi rebels said more details would be released later about their attacks. The Houthis did not immediately claim they were behind the Jiddah fire on Friday.

Meanwhile, Saudi state television acknowledged attacks in the town of Dhahran targeting water tanks that damaged vehicles and homes. Another attack targeted an electrical substation in an area of southwestern Saudi Arabia near the Yemeni border, state TV said.

The North Jiddah Bulk Plant stores diesel, gasoline and jet fuel for use in Jiddah, the kingdom’s second-largest city. It accounts for over a quarter of all of Saudi Arabia’s supplies and also supplies fuel crucial to running a regional desalination plant.

The Houthis have twice targeted the North Jiddah plant with cruise missiles. One attack came in November 2020. The last came on Sunday as part of a wider barrage by the Houthis.

At the time of the 2020 attack, the targeted tank, which has a capacity of 500,000 barrels, held diesel fuel, according to a recent report by a U.N. panel of experts examining Yemen’s war. Repairing it after the last attack cost Aramco some $1.5 million.

The U.N. experts described the facility as a ‘civilian target,’ which the Houthis should have avoided after the 2020 attack.

‘While the facility also supplies the Saudi military with petroleum products, it is mostly supplying civilian customers,’ the panel said. ‘If the plant had been out of service of a significant period, the impact on the kingdom’s economy as well as on the welfare of the residents of the Western region would likely have been significant.’

Cruise missiles and drones remain difficult to defend against, though the U.S. recently sent a significant number of Patriot anti-missile interceptors to Saudi Arabia to resupply the kingdom amid the Houthi attacks.

In September, the AP reported that the U.S. had removed its own Patriot and THAAD defense systems from Prince Sultan Air Base outside of Riyadh.

The attacks have renewed questions about the kingdom’s ability to defend itself from Houthi fire as a year-long war in the Arab world’s poorest country rages on with no end in sight. It also comes as Saudi Arabia issued an unusually stark warning that it is unable to guarantee its oil production won’t be affected by further attacks – which could push global energy prices even higher amid Russia’s war on Ukraine.

Charles Igbinidu is a Public Relations practitioner in Lagos, Nigeria
@https://twitter.com/ionigeria
Previous Russian brigade commander dead after being run over with a military tank by angry Russian soldier
Next Terrorists prevent aircraft’s take-off, kill one at Kaduna airport