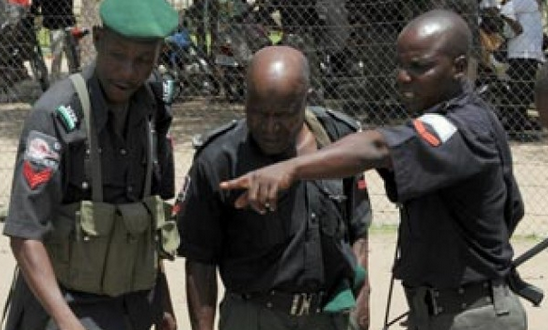 Spread the love
There was palpable commotion at the popular Water works road within the Abakaliki metropolis at early hours of this morning as Okada riders were seen burning tyres and dumping refuge at the centre of the road in protest of one of their members (names withheld) who was allegedly shot and killed by a policeman over argument bordering on N50.
Investigation revealed that the trigger happy policeman shot his victim under the influence of alcohol.
The Senior Special Assistant to Governor David Umahi on Internal Security, Dr. Kenneth Ugbala who visited the scene of the incident ordered the men and officers of Ebonyi State Fire Service to come and quench the burning tyres in the environment in order to forestall destruction of properties by any form of inferno.
When newmen visited Waterworks road and other adjourning streets in the area, aggrieved youths were seen setting up road blocks with stones, woods and burning tyres in continuation of their protest over the demise of the Okada rider Wednesday night.
As at the time of this report, the number of youths surging towards the streets were gradually increasing as a detachment of the police were seen trying to maintain peace and order within the metropolis. The police, according to report has began clampdown on Okada riders as some of them had been arrested and their motorcycles confisticated.
The development is presently causing tension and fear among residence within the metropolis. Addressing newsmen along waterworks road, the SSA to the Governor on Internal Security who expressed dismay over the killing of the Okada rider allegedly by a policeman in Anti-Kidnapping, AK, Unit of Ebonyi State Police Command called on the Okada riders not to take the law into their hands as the present administration would ensure that the suspect dealt with according to the law Ugbala further disclosed that the state government was calling for a meeting between the Okada riders association and the state government so that all their concerns would be addressed without any bias Meanwhile, Governor David Umahi yesterday ordered the arrest and prosecution of the suspect.
The Governor who spoke through his Chief Press Secretary, Sir Emmanuel Uzor described the incident as barbaric and callous and expressed confidence that justice will be done in the killing of the deceased. He said the incident has further called for more dedication, commitment and professional training for the country’s security personnel to stop further killings of innocent Nigerians on the line of their duties.
The governor also assured that he would take up the matter to the Inspector General of Police to ensure that the trigger happy policeman who shot and killed the boy was punished in line with the rules of his engagement.
Umahi warned that his administration will not tolerate any form of killing of innocent citizens or extra judicial killing by the security agencies and ordered the Commissioner of Police in the State, Mr Titus Lamorde to arrest the trigger happy policeman who shot the deceased and other members of the team to face full weight of the law.
While expressing his sincere condolences to the family of the deceased, Governor Umahi promised to visit the family when full information concerning his family was made available. He called on the public to remain calm as the situation was already under control and never to resort to taking laws into their hands.
Efforts to get the reaction of the Police spokesman in the state, Loveth Odah, at press time were not successful.
Share