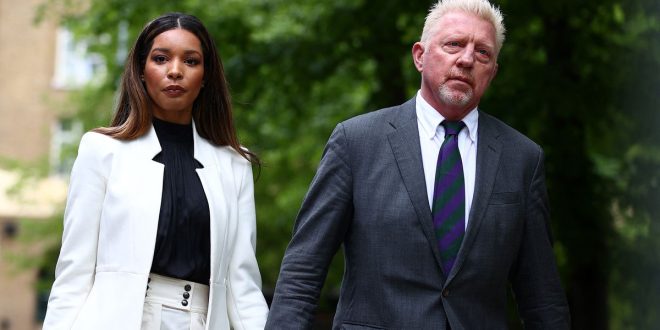 Former tennis player Boris Becker has been sentenced to two and a half years in jail after being found guilty of four charges under the Insolvency Act earlier this month.

The German, who also previously coached current world No.1 Novak Djokovic, was convicted of hiding a number of assets, including nearly £700,000, 75,000 shares in a tech firm and some of his most prized tennis titles – including two Wimbledon trophies. Becker was legally obliged to declare all of his assets after being declared bankrupt five years ago

Following the 2017 bankruptcy the six-time Grand Slam winner handed his wedding ring over, but concealed ownership of a £1.3million home in his native Germany, a £692,000 loan he received from a Liechtenstein bank as well as his shares in an artificial intelligence firm.

Becker, who wore his Wimbledon tie as he was accompanied to Southwark Crown Court by his partner Lilian de Carvalho Monteiro, has a previous conviction for tax evasion and attempted tax evasion in Germany in 2002, and Judge Deborah Taylor was implored to take that into account when deciding on a sentence for the 54-year-old in this case.

Becker earned nearly £40million during his illustrious playing career, but said he ran into financial difficulties after retiring through costly divorces, childcare costs, and his lavish lifestyle.

Becker made history in 1985, becoming the youngest-ever winner of a Grand Slam men’s singles title when he won Wimbledon aged just 17. He would go on to defend his title at SW19 the following year, before winning the tournament for a third and final time in 1989. Becker also won the Australian Open twice, in 1991 and 1996, as well as the 1989 US Open. Becker also won a gold medal in the men’s doubles at the Barcelona Olympics in 1992