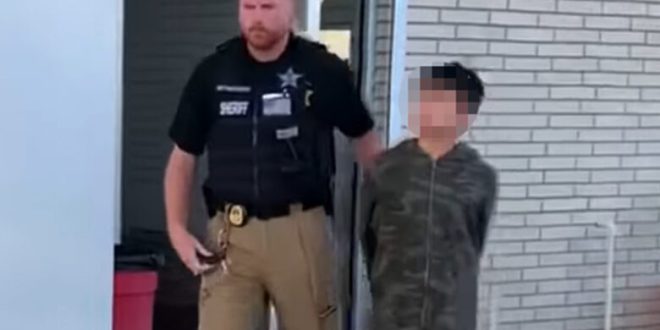 The 10-year-old boy in the fifth grade at Patriot Elementary School in Cape Coral, Florida, is handcuffed and walked into a police cruiser Saturday for making a threat to conduct a mass shooting. Lee County Sheriff's Department

Charles Igbinidu May 30, 2022 Life and Style Leave a comment

A 10-year-old in Florida was arrested Saturday after allegedly sending a text message threatening to shoot up his school.

According to the Lee County Sheriff’s Office, Marquez is a 5th grade student at Patriot Elementary School in Cape Coral, Florida.

After being interviewed by authorities, Marquez was charged with making a written threat to conduct a mass shooting.

Sheriff Carmine Marceno said in the statement: ‘This student’s behavior is sickening, especially after the recent tragedy in Uvalde, Texas.

‘Making sure our children are safe is paramount. We will have law and order in our schools! My team didn’t hesitate one second…NOT ONE SECOND, to investigate this threat.’

The incident is being investigated by the The School Threat Enforcement Team and the Youth Services Criminal Investigations Division.

The sheriff continued saying: ‘Right now is not the time to act like a little delinquent. It’s not funny. This child made a fake threat, and now he’s experiencing real consequences.’

Two days after the attack on Robb Elementary School, Sheriff Marceno was forthright in his reaction telling the media: ‘You don’t get to shoot our children. You bring deadly force in this country, we are going to kill you.’

The sheriff thanked Florida Governor Ron DeSantis for giving law enforcement in the state ‘the tools’ to keep children safe and to preserve law and order.

Amd on May 27, Sheriff Marceno appeared in an eight-minute long video in which he criticized federal aid for Ukraine.

The sheriff said that the money should be spent on ‘target hardening’ our schools.

In front of six sheriff’s deputies, all armed with assault rifles and clad in tactical gear, Marceno said that the residents of Lee County should rest assure that their children were safe in schools in the area.