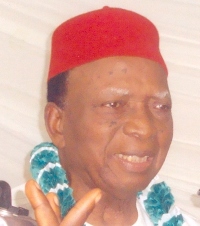 Nwabueze said this during the public presentation of his book, titled, ‘Save our Constitutional Democracy from Emasculation’ in Abuja on Monday.

He said Nigeria could not maximise its potential under the current structure of 36 states and an all-powerful Federal Government.

The elder statesman thanked Osinbajo for helping to douse the tension ignited by secessionist groups in the country.

Nwabueze said, “Happily, the tension created by these separatist agitations has been or is being doused by the actions and statements of the acting President which also bears testimony to the fact that dialogue and consultations, not repression, are the appropriate response to citizens’ agitations for justice, equity, equal treatment and self-determination. We commend the acting President.

“But he needs to do more. He needs to persuade his boss, President Buhari, to withdraw his opposition to the restructuring of the federation into six or more self-governing regions or zones, with the powers of the central government drastically reduced, so as to diminish the fierce contest for its control.

The elder statesman asked the acting President to ensure that a Truth and Reconciliation Commission is set up to address grievances and agitations.

According to him, a similar commission had been set up in some 23 countries of the world including South Africa, Germany and Canada.

Nwabueze said if Nigeria as a country must achieve its goal to remain together as one nation, the time had come for citizens to tell themselves the truth about all the injustices and repressions, all the perversions and subversions that had been or were being perpetrated by the government.

He said Nigerians must “admit the errors and wrongs committed and render suitable apologies to enable us to move forward as a country.”

The senior advocate added, “He (Osinbajo) needs also to initiate moves for national reconciliation by setting up a Truth Reconciliation Commission, as has been done in some 23 countries of the world from South Africa to Germany to Paraguay to Canada to Kenya.

“As a country desirous of staying together and becoming one nation, time has come or ought to come soon when we have to tell ourselves the honest truth about all the injustices and repressions, all the perversions and subversions that have been or being perpetrated in the administration of government in the country.

“We must admit the errors and wrongs committed, render suitable apologies, make necessary amends, try to put the past behind us and march forward into the future with a view to achieving national reconciliation, which cannot be adequately met through actions in court for reparation or by criminal prosecutions of the perpetrators.”

Nwabueze said the legislative arm of government remained the last hope of the common man.

He also lambasted the Supreme Court over its judgments which appear very conflicting especially the apex court’s decision on former governor of Rivers State, Rotimi Amaechi and that of Celestine Omehia which he described as a scandal and a stain on the nation’s judiciary.

Also speaking, the Speaker of the House of Representatives, Yakubu Dogara, said Nigeria would not be able to maximise its potential as long as the executive arm of government continued to interfere in the activities of the two other arms of government.

Dogara said advanced democracies like the United States had been able to deliver the dividends of democracy to the people because all the arms of government were able to function independently.