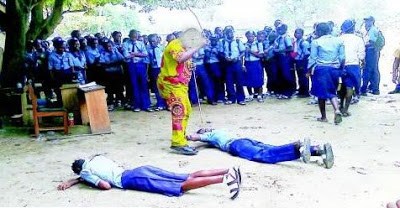 A man, Babangida Salisu, has landed in prison for allegedly flogging a 6-year-old boy to death in Katsina state.

Salisu, 40, who resides at Yankara village in Faskari local government area of Katsina, on March 12, 2018, flogged the boy for coming late to school

Punch reported that the boy allegedly died after the flogging.

The boy’s mother, Sa’ade Babangida, reported the incident at Faskari Police Station from where the case was transferred to the State Criminal Investigation and Intelligence for in-depth investigation.

Salisu is now facing a charge of culpable homicide.

When Salisu appeared before a Katsina senior Magistrate court on Friday for cognizance, the prosecutor, Inspector Sani Ado, said investigation was still in progress and sought an adjournment which the presiding senior magistrate, Hajiya Fadile Dikko, granted.

She directed that Salisu should be remanded in the prison custody till May 24 when the case would come up for mention.

Writer, Investigative Journalist, and Social Media Strategist
Previous Woman Flees As Boyfriend Drowns In Hotel Swimming Pool
Next MIRACLE: Told by Doctors she was infertile, Dumped by Ex for barrenness, Now a Mother