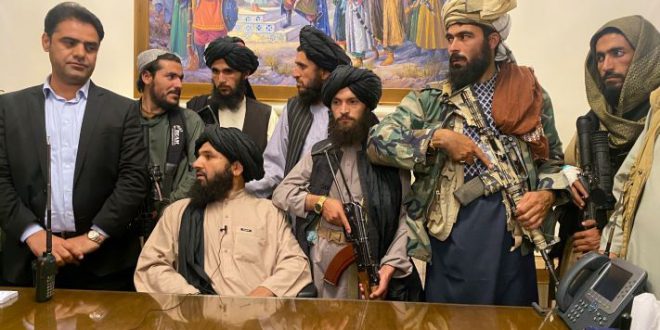 THE TALIBAN’S reign of terror has begun as fighters are reportedly going door-to-door with a kill list and women face torture & execution under brutal new rules.

Disturbing reports are already emerging from Afghanistan as the government collapsed and the Taliban seized power once again nearly 20 years after being driven out by the West.

Taliban forces have already pledged to reintroduce the twisted laws which saw them brutalise women and gay people when they ruled Afghanistan in the 90s.

And there have already been reports throughout their advance of women being shot dead and girls as young as 12 being dragged from their homes to be “married”.

It appears however their first mission is tick off victims who have made their way onto their “kill list” as they hunt down anyone who may have helped forces of the US, UK and other nations during the occupation.

And they are reportedly going door-to-door in Kabul as they hunt for soldiers, police, government officials and journalists.

Afghanistan’s descent into chaos has seen unverified reports emerge of thousands gathering to witness an execution in Kandahar at a sports stadium.

And there are claims a woman has been sentenced to be stoned to death in Samangan.

Taliban officials have previously pledged to bring back these types of punishments, and the group’s top spokesman said yesterday they will leave the punishments up to their “courts”.

Thousands of Afghans have already tried to flee the city as horrifying videos showed them desperately trying to climb aboard planes out of Afghanistan.

The disturbing reports come as…

Britain, the US and their allies are facing one of the biggest foreign policy embarrassments in decades as the country was overrun by the Taliban in a matter of weeks.

Sayed Mustafa Kazemi, a Radio Free Europe journalist trapped in Kabul, chillingly tweeted that Taliban are now roaming the streets on the hunt for their enemies.

“At least 3 journalists’ houses were searched in the last hour. Kabul is now becoming deadly. This is a game-changer for us all.

Matt Zeller No One Left Behind

“Many have started counting their final hours of life in Kabul. Nobody knows what happens next.

Other reports stated people are now hiding in their homes as Taliban fighters are stopping and searching cars, while fighters are also reportedly compiling lists of women in the government and media.

It is claimed fighters beating musicians after destroying their instruments, and they are also disarmed any civilians with weapons as they say they “no longer need them”.

Australian not-for-profit Forsaken Fighters – that helps support those left behind – tweeted one of the interpreters it works with was last night executed in Kandahar.

They shared the man – a dad-of-four- had been “mutilated” as they found out he had worked for both the US and UK around ten years ago.

Matt Zeller, a US veteran of the Afghan war, said about 44,000 Afghans who helped Washington during the 20-year conflict need to be rescued.

Zeller, who co-founded No One Left Behind, a charity that helps Afghans settle in the US, told Al Jazeera the reports outside of Kabul are “horrific”.

He said: “There are public executions in Kandahar in the stadium.

“Women have been told they cannot leave their homes in Herat and the Taliban are going door to door in Mazar-i-Sharif looking for anyone who worked with the US military.”

Australian news outlet ABC previously reported Taliban fighters had sent chilling warnings to anyone it suspected of working with the West before its latest offensive.

“We have reports that you and other interpreters are in contact with infidel friends, to get you out of Afghanistan and get you a visa,” one letter read.

“Therefore you will not be forgiven by the Islamic Emirate of Afghanistan, neither will we accept any other excuse.”

Afghan interpreters have previously said they fear being left behind under Taliban control will be a death sentence as they face being hunted down and executed.

It was reported one translator was stopped by Taliban militants and beheaded back in May – with witnesses saying the fighters told him he was a “spy for the Americans”.

Brutality looks set to reign again in Afghanistan, with Taliban spokesman Suhail Shaheen saying punishments and executions are up to the “religious followers and the courts”.

And when asked specifically about the horrific violence meted out in the 90s, such as chopped-off hands and feet and stonings, he said: “I can’t say right now. It is up to the courts and the judges and the laws.”

It was reported by France24 that in July the Taliban issued an edict demanding local leaders to present lists of girls aged over 15 and widows under 45 so they could be married off the Taliban fighters.

Meanwhile, Taliban judge Gul Rahim bragged the barbaric violence would be making a return when he spoke to Bild in July.

He spoke proudly of handing down sentences featuring amputation and death – saying his favoured methods of execution are stonings or hangings.

And he said there can “only be two punishments” for gay people, either being stoned to death or being crushed by a 10ft high wall which is pushed down on top of them.

The speed of the Taliban’s victory has shaken the world and came just weeks after troops from the US, UK and other Nato countries left Afghanistan.

Twenty years after they were ejected by the US and its allies in the wake of 9/11 they are now back in power.

Boris Johnson has blamed the US for the advancement of the Taliban in Afghanistan, claiming President Biden “accelerated” their control.

The Prime Minister said the “difficult” situation had been exacerbated by the President’s decision to withdraw troops from the war-torn country.

Afghan President Ashraf Ghani fled the country – saying he did so to “prevent a flood of bloodshed” and to stop the destruction of Kabul.

His colleague Johnny Mercer, who fought in the country, said it was “humiliating”.

THE Taliban surged to victory quicker than anyone expected…

April 14 – President Joe Biden announces US troops will withdraw from Afghanistan starting on May 1 and ending on September 11.

May 4 – Taliban fighters launch a major offensive on Afghan forces in southern Helmand and at least six other provinces.

June 7 – Government officials say fighting is raging in 26 of the country’s 34 provinces.

June 22 – Taliban fighters launch a series of attacks in the north of the country, far from their traditional strongholds in the south.

July 2 – American troops quietly pull out of their main military base in Afghanistan – Bagram Air Base, ending US involvement in the war.

July 21 – Taliban insurgents control about a half of the country’s districts, according to the senior US general, underlining the scale and speed of their advance.

July 25 – US vows to continue to support Afghan troops “in the coming weeks” with intensified airstrikes to help them counter Taliban attacks.

July 26 – The United Nations says nearly 2,400 Afghan civilians were killed or wounded in May and June in escalating violence, the highest number for those months since records started in 2009.

August 6 – Zaranj in the south of the country becomes the first provincial capital to fall to the Taliban in years and many more the ensuing days, including the prized city of Kunduz in the north.

August 13 – Four more provincial capitals fall in a day, including Kandahar, the country’s second city and spiritual home of the Taliban. In the west, another key city, Herat, is overrun.

August 15 – The Taliban take the key eastern city of Jalalabad without a fight, effectively surrounding Kabul.

In scenes that echoed the fall of Saigon at the end of the Vietnam War, helicopters were seen ferrying US embassy staff to safety at a secure area near the airport.

The Taliban appeared to offer an amnesty for government forces and said they want a “peaceful transfer of power”.

“No one’s life, property and dignity will be harmed and the lives of the citizens of Kabul will not be at risk,” the Taliban said.

But questions remain about whether the Taliban leadership can control troops on the ground and prevent them from taking revenge.

When the Taliban last entered Kabul in 1996 after first seizing power, they tortured a former President then dragged him into the streets and hanged him.