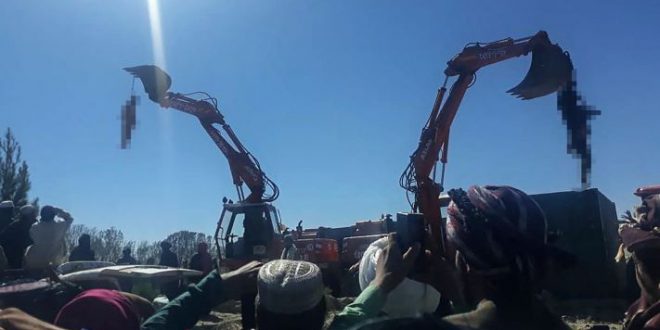 People watched and took photographs from below as the bodies were hoisted up into the air (Image: AFP via Getty Images)

Horrifying new images from Afghanistan show the bodies of three alleged criminals being hung from diggers by the Taliban.

The three men were killed by another man when they entered his home in the Obe district, in Herat province in the north-western part of the country, deputy governor Mawlawi Shir Ahmad Muhajir said.

Graphic images of the corpses were shared on social media, showing the bodies being hoisted into the air and left hanging by their necks from the raised arms of two diggers, as people watch on and take photographs from below.

The gruesome display on Tuesday builds upon concerns that the Taliban have returned to their brutal ways last seen when they were in control of Afghanistan from 1996 to 2001.

This was in spite of claims that the group had changed from their hard-line ways during their 20 years in exile.

The militant group didn’t want “any internal or external enemies”, leaders insisted as well as promising that there wouldn’t be violence against women.

In the Taliban’s first press conference back in August, the group claimed they sought no revenge and everyone who worked with the West was forgiven, pledged to honour women’s rights within the norms of Islamic law and vowed not to harbour anyone targeting other nations.

But just days after these claims were made, reports circulated of Afghan children being beaten at checkpoints by Taliban fighters. Weeks later, sickening footage emerged of an Afghan soldier being killed by the Taliban and his severed head being held by his hair.

According to Mail Online, the latest images spread around as rights group Amnesty International claimed Taliban forced unlawfully killed 13 ethnic Hazaras, most of whom were Afghan soldiers who had surrendered to the insurgents.

Taliban fighters atop a Humvee vehicle parade along a road to celebrate after the US pulled all its troops out of Afghanistan ( Image: AFP via Getty Images)

The killings were carried out in the village of Kahor, in Kaykunda province in central Afghanistan, Amnesty said,

Eleven of the victims were members of the Afghan national security forces. The two others were civilians; one was a 17-year-old girl.