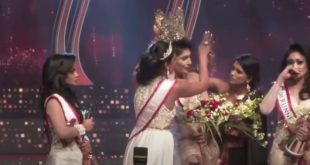 Caroline Jurie claimed Pushpika De Silva was not eligible to win as she was divorced and pulled the crown from her head on stage. Reigning Mrs. World Caroline Jurie has been released on bail after she was arrested in Sri Lanka for allegedly injuring a pageant contestant in an on-stage row.