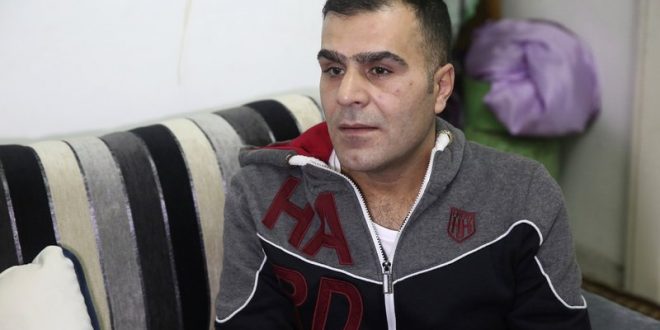 His dream of a better life was abruptly crushed when President Donald Trump banned Syrian refugees from the U.S. until further notice.

Sawan learned of the entry ban while watching late night TV  news with his wife in their small apartment in the Jordanian capital of Amman.

“When we heard of the order, it was like a bolt of lightning, and all our hopes and dreams vanished,” the 40-year-old said Saturday, a day after Trump’s executive order.

He and other Syrian refugees bristled at the idea that they pose a potential security threat, saying they are peaceful people fleeing persecution.

Some warned that the new U.S. policy will be seen as targeting Muslims and further inflame anti-American sentiment in the region.

“This decision made the U.S. loose its reputation in the world as the biggest economy, the biggest democracy,” said refugee Nasser Sheik, 44, who was paralyzed by a stroke two years ago and lives with his family in Amman.

“We are not going out to harm people of other countries,” added his wife Madaya, 37.

Trump on Friday suspended all refugee admissions to the U.S. for four months and banned the entry of Syrian refugees indefinitely pending a security review meant to ensure terrorists cannot slip through vetting. Trump also issued a 90-day ban on all entry to the U.S. from seven Muslim-majority countries with terrorism concerns, including Syria.

At the time of Trump’s decision, more than 27,000 Syrian refugees from 11 Middle Eastern host countries were being considered for resettlement to the U.S. and were in various stages of the approval process, according to the International Organization for Migration.

Close to 5 million Syrians have fled their country since an uprising against President Bashar Assad erupted in 2011 and escalated into civil war.

Most refugees have settled in neighboring countries, including Jordan and Lebanon where their struggle for survival gets tougher every day.

Savings have run out, jobs are poorly paid and refugee children learn in crowded classrooms. Many refugees prefer to return home, but that’s not an option as long as the war continues. Eager to escape tough conditions in the host countries, resettlement to the West now seems the best alternative.

Ammar Sawan fled the Damascus suburb of Moadamiyeh in 2012, after he was roughed up by pro-Assad militiamen and feared eventual arrest.

His wife Sanaa, 35, and three sons followed him a year later, fleeing government shelling. The couple had a fourth child, a girl, in Jordan, last year.

The family struggles to cover rent, utilities and school transportation for the three oldest, especially during the winter when Sawan’s income from his part-time work as an upholsterer drops.

Sawan said he underwent the first round of security vetting for possible resettlement to the U.S. in October.

With a new life in America suddenly in reach, he began to dream of a decent education for his children and a stable income for the family.

“My dream, even before the war in Syria, was to live in America,” he said, as the family huddled around a gas heater in the living room.

Now he is disappointed in America. “We are not terrorists and we don’t support terrorism,” he said.

“It will not make America safer,” Jan Egeland, head of the Norwegian Refugee Council, said by phone from Oslo. “It will make America smaller and meaner.”

He said the new U.S. policy deals a blow to international responsibility for those fleeing persecution, an idea forged in the aftermath of the Holocaust when Jews and others seeking safe haven were often let down.

Others said U.S. security checks of refugees are already robust, involving biometric screening and up to three years of vetting.

The suspension of the refugee admissions allows for exceptions, including for members of minority faiths claiming persecution, such as Christians in Muslim-majority countries.

Feras Zahka, 35, a Syrian Christian who fled to Turkey, is in the final stages of vetting to immigrate to the U.S., but now fears he won’t be able to go.

“I was going through security screenings before the (US) elections took place,” he said by phone from Istanbul, where he works as a hotel receptionist. “I am scared my file will be scrapped.”

Bashir al-Saadi, 67, a Christian in the town of Qamishli in northern Syria, said giving preferential treatment to Christians could raise tensions with their Muslim neighbors.

“Giving visas to Christians (only) will give the impression that the U.S. is a Christian state and is standing against Islam,” said al-Saadi who has family in the U.S. “This will trigger resentment, might foment religious conflict and reflect badly on us.”

Mohammed Hassan al-Homsi, who fled his hometown of Palmyra in Syria, said Trump’s decision will serve as propaganda fodder for Islamic State, the extremist group that controls parts of Syria and Iraq.

The entry ban will encourage Islamic State supporters, al-Homsi wrote in text messages from Syria’s rebel-held province of Idlib where he found refuge.

“This decision proves the militant group’s theory that the West, led by the United States, is an enemy of Muslims,” he wrote. “It’s an unfortunate decision