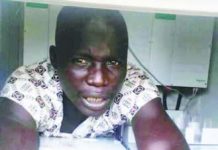 Suspected Vandal Nabbed After Dozing Off At Crime Scene In Lagos

A man who claimed to be a farmer, Usman Jubril, has been arrested for allegedly vandalising a solar energy system installed in Government College, Ajara, Badagry, Lagos State.
ionigeria learnt that the drunken suspect was apprehended by operatives of the Nigeria Security and Civil Defence Corps after he slept off at the scene of the crime. Jubril later confessed to the crime.

He, however, said he acted under the influence of alcohol. The father of two explained that he had gone to have fun on the premises of the school on September 2, after selling his goods.

He said, “I am a farmer and live in Ipokia, Ogun State. I took cassava and corn to Badagry, but I didn’t make enough sales. I took the goods to Seme, where I sold everything. I came back to Badagry in the evening to have fun.

I bought three bottles of gin and went with them to the school to watch a football match. I drank everything and took 500ml tramadol. In drunken stupor, I threw a stone at the glass housing the solar system and it broke.

I went inside the facility and slept off. I smoke Indian hemp, but that was the first time I would take alcohol. It was the drink that affected my faculty. I didn’t even know how I got to their (NSCDC) custody.”

The NSCDC Commandant in Lagos State, Tajudeen Balogun, said men of the command had received several complaints about the vandalism of solar energy facilities in some public schools in the state.

Previous Ooni Of Ife Says Wuraola Is Free To Mingle Now, After Benin Elders Returned Her Bride Price
Next Photos: Indonesian Woman Hospitalised After Sharia Court Inflicted Her With 100 Lashes