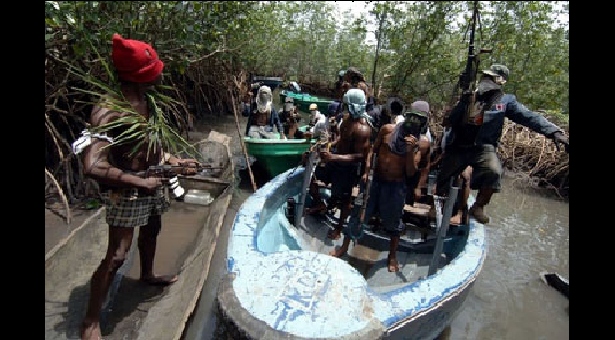 Spread the love
By Emmanuel Addeh in Yenagoa

There were indications on Tuesday evening that militants operating in the Niger Delta may have again blown up a gas pipeline belonging to the Nigerian Agip Oil Company (NAOC) at Ogbembiri in Southern Ijaw local government area, Bayelsa State.

It would be more than a dozen times that the oil and gas facilities belonging to the Italian Oil giant would be breached this year alone.

The fresh attack by gunmen, it was learnt, occurred on the pipeline about 48 hours ago, which raised questions within the community as to why security agencies saddled with the responsibility of protecting oil installations had been unable to stop the frequent breaches.

During the latest attack, the gunmen reportedly stormed the community at about 9:00pm, traced the pipeline and ruptured it at a point it was previously repaired after the last attack.

While some sources said dynamites were used to blow the pipeline, others said the gunmen deployed other mechanical devices to rupture the line along the axis.

The pipeline said to be a major gas supply facility in the country, reportedly crosses Tumor community in Bomadi, Delta State; Ogbuasiri in Ekeremor and Ogbembiri in Southern Ijaw, Bayelsa State.

“Agip awarded the contract for security surveillance and repairs of the pipeline in case of a breach to a contractor from the community.

“So, the contractor enjoys dual contract of protecting the pipeline and also repairing it whenever there is a leakage. But it is baffling how the pipeline increasingly comes under attack’’, a source said.

He added that the facility, “ is a major pipeline because it supplies gas for domestic consumption’’, noting that ‘’Agip has spent a lot of money fixing it.”

While the pipeline is said to be relatively safe in other communities, it has continued to be incessantly attacked at the Southern Ijaw community, the source noted.