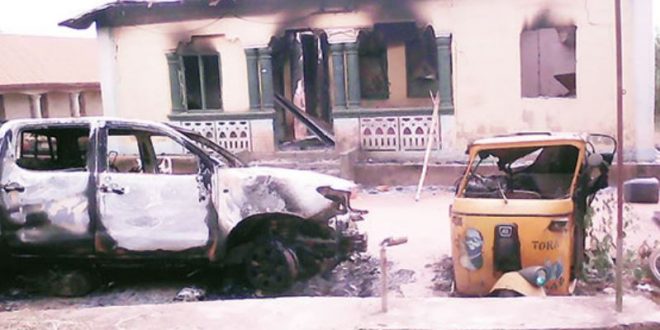 A Police outpost at Ahiaukwu Olokoro, in Umuahia LGA of Abia State, was burnt down by suspected armed robbers and drug dealers, at about 8: PM, on Tuesday night.
One Operational vehicle attached to the Police station, as well as one tricycle parked at the station were also burnt. They broke the wind shield of a Volkswagen car park within the Police station.

According to Punchng, the Commissioner of Police in the State, Anthony Ogbizi, said complains from the indigenes of the area about the activities of the criminals made the state command to create two nipping points in the area to safeguard the residents of the area.

He added that no life was lost and no arms were taken away from the station, while the hoodlums attacked. He disclosed that Police Operatives acting on tip off had raided the area and arrested four suspected drug dealers and armed robbers.

But while officers in the outpost were trying to transfers them to the divisional Police station at Ubakala, some hoodlums attacked them and aided two of the suspects to escape.

Ogbizi said, “They did not stop at that as they later went back and set the outpost on fire.” He said the Police was not deterred by the attack as they remobilized officers and arrested 7 of hoodlums who attacked the station.