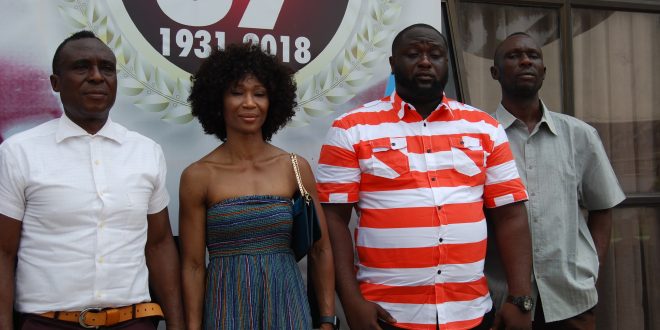 Veteran music maestros, King Sunny Ade and Ambassador Osayomore Joseph will serenade guests at the burial ceremony of business mogul and renowned philanthropist Dr. Iyayi Efianayi. The burial ceremony slated to take place from Thursday, March 21, 2019 to Sunday, March 24, 2019 is expected to attract the crème de la crème of every sector of the Nigerian society.

While King Sunny Ade will perform on Saturday, March 23, 2019, Ambassador Osayomore Joseph will take his turn on Sunday, March 24, 2019.

These and other activities were unveiled by Dr. Caesar Osaheni-Iyayi, the Executive Chairman of Caesar Engineering and Construction Limited and the eldest offspring of the highly revered industrialist at an interactive session attended by members of the family, friends and media practitioners on Tuesday, March 12, 2019 at Iyayi Homestead, Egba Crescent, Ugbor GRA, Benin City.

According to Dr. Caesar Osaheni-Iyayi, the ceremony will commence on Thursday, March 21, 2019 with a Service of Songs at Iyayi Homestead, Egba Crescent, Ugbor GRA, Benin City, Edo State by 4 PM.

This will be followed by an interdenominational Funeral Service at the Main Auditorium of Ugbowo Campus of the University of Benin, Benin City on Friday, March 22, 2019. The event, which is slated to commence by 11:00am will be anchored by Warri Choral Society.

At the end of the event, the body will depart the University of Benin Main Auditorium by 2:00pm for Iyayi Homestead, Egba Community, Uhunmwonde Local Government Area of Edo State for lying-in-state.

Interment will take place in the morning of Saturday, March 23, 2019 after a short church service at Egba Baptist Church, Egba.

This will be followed at 11:00am by a reception at Iyayi Homestead Egba during which Veteran musical maestro, King Sunny Ade will serenade guests.

A thanksgiving service is also slated to hold by 12noon on Sunday, March 24, 2019 at the Egba Baptist Church, Egba.

The burial ceremony will be rounded-off with a reception at Iyayi Homestead Egba. Ambassador Osayomore Joseph, a Benin City based veteran musician will perform.

Late Dr. Iyayi Efianayi was born on January 6, 1931 in Egba and died October 11, 2018 in France on his way to Nigeria from the United States of America where he went for a medical check-up.

Also speaking at the interactive session, the Public Relations Manager of Caesar Engineering Construction Company Limited and the Vice-President of the Egba Development Organization Mr. Julius Onaghise paid glowing tribute to late Dr. Iyayi, describing him as a father to all members of Egba community, benefactor to many, cheerful, humble and very God fearing.

According to him, Iyayi’s good works and contributions towards the development of Egba land and Edo state in general will never be forgotten.

In his words: “the passage of Dr. Iyayi Efianayi is a loss to the family, a loss to Egba community and a loss to humanity; he was a genius with positive characteristics that distinctively singled him out among his peer. He led a life of selfless service to his immediate community, Egba, Benin Kingdom, Edo state, Nigeria and the world at large”.

As a human capital builder, he brought many Egba indigenes to societal competition; as an infrastructural provider, he single-handedly provided infrastructure that the government could not provide for rural communities for Egba community. Infrastructures such as good roads, educational institution, health facilities, electricity, security, economic empowerment amongst others.

He was a tree of unity personified whose death will remain a monumental loss to humanity and Egba community, but we are consoled with the fact that he led a fulfilled life”, he said.

It would be recalled that the Governor of Edo state, His Excellency Mr. Godwin Obaseki, the Esama of Benin Kingdom, Chief Sir Dr. Gabriel Osawaru Igbinedion, former Governor and immediate past National Chairman of the All Progressives Congress (APC) Chief John Odigie-Oyegun, Senator Mathew Urhoghide, the senator representing Edo south senatorial district and other dignitaries have paid their condolence visits to the deceased’s family.

Speaking during his visit, the Edo state governor, Godwin Obaseki noted that Dr. Iyayi led a humble and great life that is worthy of emulation.

According to him, he was a trailblazer on so many fronts; in business, philanthropy and community service, created jobs for thousands of Edo people and residents and supported the church and the less-privileged in several ways.

“Late Iyayi will be greatly missed, his passing is a great loss to the state and our great country.” He said.

Also, the Esama of Benin kingdom who was overwhelmed with emotion stated that, he was consoled by the fact that his late friend and brother Dr. Iyayi Efianayi left a good successor that will uphold his legacies.

He commended Dr. Caesar Osaheni-Iyayi for the manner in which he has conducted affairs since his father’s demise and prayed that God grant the family the fortitude to bear the loss.