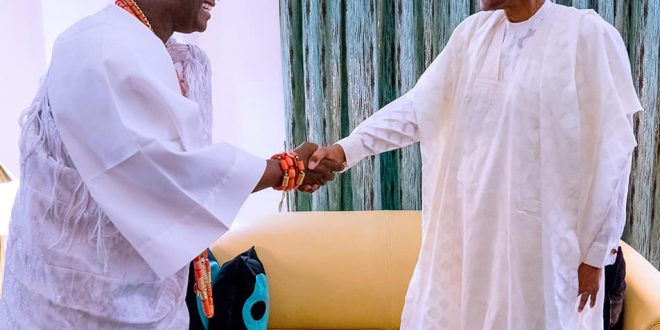 Sunday Igboho blasts Ooni of Ife, reveals why he refused to honour his invitation

Popular Yoruba rights activist, Sunday Adeyemo aka Sunday Igboho, has hit the Ooni of Ife, Oba Adeyeye Ogunwusi, for allegedly failing to represent the Yoruba nation well during his recent meeting with President Muhammadu Buhari on killer herdsmen in the South West.

The monarch, he alleged, didn’t communicate the anger and pains of the Yoruba nation to the President during the visit.

Sunday Igboho said the Ooni disappointed himself and the Yoruba nation with his alleged action.

He also revealed he rejected an invitation by the monarch because of his alleged failure to represent Yorubaland well before Buhari.

Igboho spoke on Wednesday morning in a virtual ‘Townhall with Yoruba in Diaspora’ monitored by The Nation.

Igboho had flushed out herders at Iganga in Ibarapa North Local Government of Oyo State at the expiration of a seven-day quit notice in January.

Oba Ogunwusi, who met with Buhari last week, had urged Igboho not to take laws into his hands.

The Ooni said Igboho has done well to speak for the downtrodden but he should allow Constituted Authorities to take over the menace of herdsmen in the South West.

Apparently displeased with the Ooni advice, Sunday Igboho said: “The monarchs are now afraid but we must keep praying for them to be united with one voice. They should not be afraid of arrest at their age. Some of them don’t even grant audience at their palaces any longer. So, everything is now in God’s hands.

“When Ooni met with Buhari over the herdsmen issue, Ooni should have told Buhari the truth but he did not. When Ooni returned, he started tackling me to leave the remaining task to the government to finish. You can imagine that kind of talk?”

He added: “Alaafin of Oyo has asked me to meet him over the matter. Alaafin should have been the one invited to meet Buhari but since the Ooni was invited, he should be bold to tell the President the whole truth and make the demands of the Yoruba people known to the President.

“The Ooni disappointed himself. Some politicians are behind Ooni’s latest move. He invited me to his palace but I refused to go.

“I would have gone if he had represented us well but he did not. I won’t honour any monarch who does not cooperate with me. Enough is enough, the Fulani have done enough.”

Charles Igbinidu is a Public Relations practitioner in Lagos, Nigeria
@https://twitter.com/ionigeria
Previous No plan to field Jonathan in 2023, we only visited him on his birthday – APC Chairman
Next Ousted Myanmar leader charged and remanded in detention