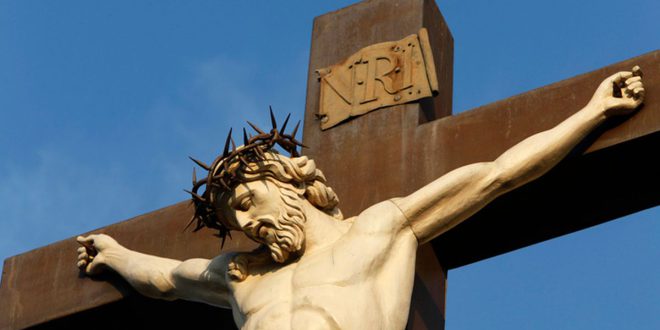 A student died during a re-enactment of Jesus Christ’s crucifixion, which the audience reportedly thought was part of the performance.

The undergraduate student named Suel Ambrose of the Clariantian University of Nigeria in Nekede in Owerri West Local Government Area of Imo State fell down during the Passion of the Christ performance, according to Nigerian newspaper Vanguard.

The tragedy is said to have happened on Good Friday and people watching the play first thought it was a “joke” and part of the performance.

But the student began bleeding after falling and people realised it was not jesting and he was taken to hospital.

A source at the newspaper said: “At the time the incident occurred everybody came together and rushed the deceased to a school hospital and later, when the case became worse, he was taken to a nearly Federal Medical Center, FMC.

“It was from there we heard he could not survive it.

“Initially when it happened we thought it was a joke, and that it was part of the drama, it was when he could not get up that was when we knew it was a serious matter and he was rushed to hospital.”

The university has yet to issue any more information about the tragedy.

Jesus Christ’s injuries are well documented in religious texts with nails said to have been hammered through his hands and feet.

The Bible says he was speared by a Roman soldier and collapsed while being made to carry the cross, but there are theories his cause of death arose from a separate injury.

The tragedy happened on Good Friday and people watching the play first thought part of the performance ( Image: Getty Images/iStockphoto)

The Mirror reported on Friday how a doctor, who is now a priest, has put forward a new theory about the death of Jesus.

The tradition of Good Friday and Easter relates to Jesus’ death and much of what we know about his demise comes from the gospels in the New Testament.https://get-latest.convrse.media/?url=https%3A%2F%2Fwww.mirror.co.uk%2Fnews%2Fworld-news%2Fstudent-dies-during-jesus-crucifixion-26730591&cre=center&cip=17&view=web

The Crucifixion, or the act of being tied or nailed to a cross, is famously how Jesus met his fate, but one scientist now believed the fatal moment actually happened before the Roman nails pierced his skin.

Doctor-turned-priest Rev Prof Patrick Pullicino, believes Jesus may have died as a result of complications from a shoulder wound and from being stretched out on the cross.

The male undergraduate at Clariantian University of Nigeria collapsed during a ‘Passion of the Christ’ performance ( Image: Getty Images/iStockphoto)

He based his evidence on the controversial Turin Shroud, and in particular from analysis of the shoulder position.

Pullciano said that when Jesus was crucified, his being stretched would have ruptured the subclavian artery, which is a pair of large arteries in the thorax that carry blood to the head, neck, shoulder and arms.

“Because of this right arm stretching, the right subclavian/axillary artery was also subjected to stretch, as it was one of the only remaining intact structures connecting the body and the right arm,” the Telegraph reports Pullicino argued.