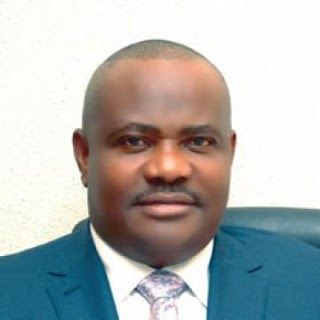 Some Rivers state students whose scholarships have been withdrawn by the state government recently staged a protest at the Chatham House in London on Monday.
The students trailed Nyesom Wike, governor of the state, who had rounded off a speech inside the building, demanding explanation over the cancellation of their bursary scheme.

Obviously angry over their action, Wike said: “You think if you do this you will win anybody over? I have passed this stage. By the time you do this, you won’t get what you want.”

A supporter of the governor tried to pacify one of the students but Wike interjected, saying: “Leave him, he is too rude.” A male voice in the crowd was heard telling the governor to put them through because they “are young people”.

After pausing for a while, Wike said: “Put those placards down!” Last month, the UK Telegraph reported that more than 100 Nigerian students face deportation because their funding had been withdrawn by the government.

The newspaper did not disclose the particular government but said the decision to withdraw the funding without their knowledge left some students saddled with debts of up to £20,000.