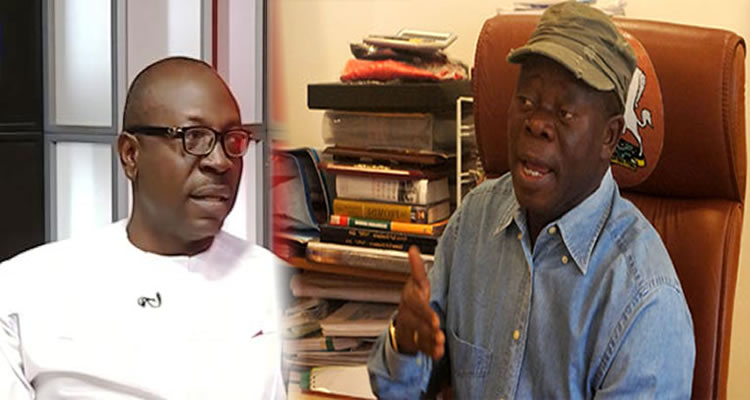 Governor Adams Oshiomhole of Edo State has been told by the Peoples Democratic Party (PDP) to stop threatening its governorship candidate in Edo State, Pastor Osagie Ize-Iyamu with the EFCC.

In a statement issued on Thursday by its caretaker committee spokesman, Prince Dayo Adeyeye, the PDP said: “We have observed in recent times the utterances of the Governor of Edo State during the APC’s gubernatorial campaigns ahead of the September 10, 2016 election in the state.

“When a Governor speaks like a garage boy; he is inviting the public to treat him as one. We call on the EFCC to demonstrate that they are not a lap dog of the APC and its leaders, by distancing itself from the unguided utterances of Governor Oshiomhole. They must show clearly that they do not take instructions from the powers that be, otherwise, the entire anti-corruption war will lose all credibility”.

“We wish to remind the Governor that he should maintain the sanctity of his office as an executive Governor of the state instead of directing the EFCC on who to arrest or prosecute.”

“Governor Adams Oshiomhole is desperate to hang on to power through his imposed stooge, despite the fact that he has lost the trust and confidence of the people of Edo State,” the statement added.

“Finally, the PDP call on the All Progressive Congress (APC) Government at both state and federal levels to at least for once play by the rules saying that ‘all the great works done by the PDP’s administrations to ensure the sanctity of the Ballot Box has been virtually destroyed by the APC Administration.

“We are now in the era of inconclusive elections. We will not tolerate any harassment, intimidation, and oppression of our Candidate in the Edo Governorship Election. We will also not allow the APC to destroy this democracy we have laboured for 16 good years to build and sustained”, the party said.

Charles Igbinidu is a Public Relations practitioner in Lagos, Nigeria
@https://twitter.com/ionigeria
Previous Asari Dokubo’s wife dies in a motor accident
Next I did not embezzle Rivers money – Amaechi