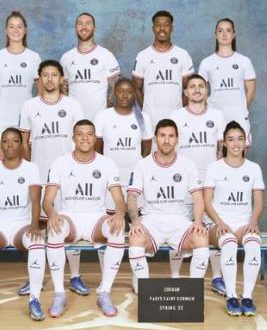 Lionel Messi’s feet have been blacked out in a new Paris Saint-Germain promotional photoshoot in a conflict of sports brands.

The Argentine superstar wears Adidas boots for contractual reasons while his club wear the Jordan brand, which belong to Nike company – the main competitor of Adidas.

That has led to a curious and somewhat bizarre conflict between the two parties, which has seen the 34-year-old’s footwear blocked out by the club in a promotional image.

Les Parisiens were modelling a new limited edition white shirt, with Messi front and centre of the image of the star players alongside his teammates and colleagues from the club’s women’s team.

It is the latest piece of kit to be released as a collaboration between PSG and the Jordan collection, Messi sits alongside Kylian Mbappe at the front and centre of the image.

Of the PSG first-team squad, 15 of the players wear Nike equipment while 13 – including Messi wear Adidas, while two wear Puma kit while Sergio Ramos wears Mizuno.

Meanwhile, former Barcelona player and manager Carles Rexach has claimed that Messi is suffering at PSG and is playing alongside “mercenaries”.

Rexach played at the Camp Nou over the course of 16 years and had multiple interim stints in charge of the Blaugrana, alongside a permanent position briefly in the 2001-02 campaign.

Rexach told Argentinian radio Super Deportivo Radio: “Messi is suffering at PSG, who are a team of mercenaries.

“They don’t play beautiful and spectacular football, nor do they play as a team.

“They win because one day Neymar decides to play, another day it’s Messi or Mbappe who bring the solutions to the match, but they don’t have a team.

“Messi went to a team that was built on big checks. Everyone plays for themselves, while Barcelona played for Messi.

“In Barcelona he was the icing on the cake and he will never find such a relationship between a club and him as a player.

“He left a huge hole at Barcelona and no one can ever replace him or do what Messi was able to do.

Messi provided the assist for Neymar vs Nantes but struggled in the match ( Image: REUTERS/Stephane Mahe)

“I would very much like him to come back and live in Catalonia one day.”

Things have not gone to plan for Messi at Paris Saint-Germain since his high-profile summer transfer from Barcelona.

The Argentine has netted just two domestic goals across 16 appearances since his move to the French capital this summer – and faced another frustrating evening as his side slumped to a 3-1 loss at Nantes on Saturday.

In November, Messi landed a record-breaking seventh Ballon d’Or title by scooping the 2021 accolade but reports have indicated that Messi is unhappy in Paris as he has failed to settle in the city and at the club for multiple reasons.

Messi’s display was strongly criticised in the French press with daily L’Equipe ranking his performance as a miserly four out of 10.

Sergio Aguero, a close friend of Messi after their days together with the Argentina international team, has gone on an angry rant about the playmaker’s treatment in the French press.