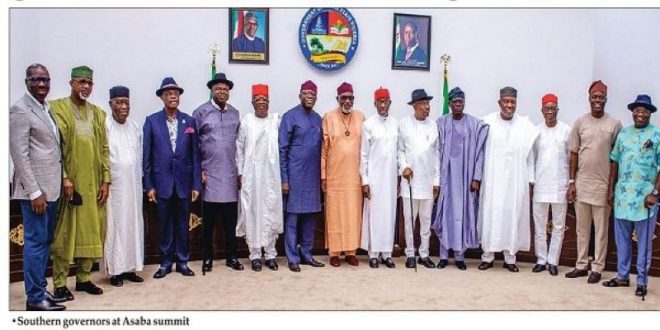 Southern governors reconvene in Lagos over state of nation

The 17 Southern governors will converge in Lagos State on Monday for a follow-up meeting to the one held in Asaba, Delta State on May 11. They will be in one accord as they review the state of the nation as it affects the three geo-political zones.

The meeting being hosted by Governor Babajide Sanwo-Olu is not meant to fuel division in the country. The main objective is to further articulate collective interest and reiterate commitment to a united Nigeria capable of guaranteeing equity, fairness and justice in an atmosphere of true federalism.

Political difference will be momentarily downplayed. Reminiscent of the Asaba meeting hosted by Delta State Governor Ifeanyi Okowa, the welfare of the people of Southern Nigeria will take the central stage, displacing the partisan acrimony between the Peoples Democratic Party (PDP) and the All Progressives Congress (APC) in the three geo-political regions.

Since the historic Asaba meeting, no concrete step has been taken to actualise some of the critical resolutions. The17 paper-weight chief security officers of dispirited Southern states have their joint constraints. They are toothless bulldogs who could only bark and not bite. Since their return from Asaba, their activities have been restricted to media comments in support of their resolutions. Instead of asking the Attorneys-General of the Southern states to forward bills to the respective Houses of Assembly to support their ban on open grazing, there is shortage of courage.

Nevertheless, tomorrow’s meeting is still important, even if it is to reiterate their position on the contentious national question.

Will the governors review their previous resolutions? Will they come up with novel suggestions on how to reconfigure the flawed or lopsided federal arrangement?

United by geography, Southern states have identical problems, ranging from dwindling revenue and poor infrastructure to soaring unemployment and perceived marginalisation by the distant Federal Government. But, more importantly, the three Southern zones face a common threat. The worsening security challenge has taxed them to the extreme.

The governors are under attack by separatist agitators who perceive them as obstacles to the realisation of their illusory objective. They can hardly tackle miniature security challenges in their domains because states under the flawed over-centralised constitution depend on the distant Federal Government for maintenance of law and order.

The new security challenges staring the powerless governors in the face were never anticipated. Northern kids follow cows to Southeast, Southwest and Southsouth states, destroying farms and crops. They allegedly harbour criminals, who kidnap, rape and kill. The governors raised eyebrows but federal authorities maintained that there is no restriction to freedom of movement for all citizens.

While the South is not against legitimate movement and trade within the confine of the law, only an insensitive governor would remain silent in the face of the unprovoked assault by armed herders and criminals on his people.

To check the herder/farmer crisis and other forms of criminality, the governors of the Southwest set up Amotekun as a regional security outfit. Their Southeast counterparts tried to float Ebube Agu, but without success.

Although the governors are largely camouflage state chief security officers, these efforts paid off. It raised security awareness. Now, the criminals know that they are under the prying eyes of patriotic, indigenous security agents.

If the invaders and killer-herders have not been checked in the Southwest, the scenario in the Northeast and Northwest may have been replicated in the South.

In Lagos tomorrow, Southern governors will reiterate their commitment to national unity. But the conditions subsist: equity, fairness and justice. These will pave the way for peaceful coexistence and harmony.

The controversy over open grazing has not fizzled out. There is justification for the enforcement of the ban. It is an anathema in a modern Nigeria that kids and teenagers who should be in school are wandering in the bush as servants of the real cattle barons.

Other resolutions are not less important. According to the Asaba Resolution, President Muhammadu Buhari should address Nigerians on the worsening security situation instead of delegating same to unelected aides who are not accountable to the people.

The governors lent their voice to the complaints against nepotism, urging the President to review appointments into government departments and security agencies to reflect diversity. The lopsided appointments generate a feeling of exclusion, marginalisation and fear of domination.

In giving recognition to Lagos as the economic capital of Nigeria and pride of the South, the governors expressed concern over the Oshodi/Apapa Road gridlock. Some of them were full of nostalgia, having lived in Lagos before returning home to serve their states. They have property and businesses in the metropolis.

In fact, there is no state or family in Nigeria that is not represented in Lagos, the former federal capital and headquarters of many multi-national companies. There is a daily influx of people from across the federation, thereby making congestion a major challenge. There is a monumental pressure on the social infrastructure.

Lagos is host to the major ports. The highest VAT is generated from Lagos. The governors were reinforcing the argument that Lagos deserves a special status within the federation. The importance of their allusion to Lagos should not be lost on the Federal Government.

The metropolis suffers from the inaction and failure of the central government to revive the refineries that on their knees despite the humongous amount for an elusive turn around maintenance. Tankers invade Apapa on a daily basis to supply fuel to all parts of the country. Throughout the world, Lagos is the only former federal capital that is not enjoying financial assistance from the central government.

The governors’ call for a national dialogue implies that the National Assembly can never be superior to the Conference of diverse Nigerian people to debate the basis for togetherness.

On the agenda of the ‘Forum 17’ at Asaba was the national question. Its elements revolve around true federalism, restructuring and devolution of powers, fiscal federalism and revenue allocation and state police.

Two weeks ago, the President appeared to have shifted ground. He said if the National Assembly can pass the Restructuring Bill into law, he will assent to it.

Until the Asaba meeting, it appeared that Southern governors were in a slumber. Why did it take them a long time to meet and brainstorm on their common problems? The last meeting before the one in Asaba held four years ago in Lagos.

The Southern Governors’ meeting has a background. Some of the salient ideas the governors are canvassing now were those espoused by Asiwaju Bola Tinubu, former governor of Lagos State, who hosted his colleagues for a brainstorming session in Lagos.

The fundamental question he raised brought him into collision with the federal might. Then, the hand of the Federal Government was heavy on the Centre of Excellence, leading to the seizure of its allocation for 14 months. Tinubu’s colleagues who were vociferous in the crusade for the enthronement of a true federal principle included Aremo Olusegun Osoba of Ogun State and Obong Victor Attah of Akwa Ibom, the modern hero of resource control struggle.

Their ideas, positions and dispositions reverberated in Asaba.

The governors’s meeting has the backing of ethnic nationalities. They believe that unity in diversity is possible when there is a sense of belonging. Even the ruling All Progressives Congress (APC) promised restructuring during the 2015 campaigns.

True federalism advocacy has a wider appeal beyond the Southern Governors’ Forum. It has set the tone for debate on the repositioning of the heterogeneous society through a sort of re-designing, reconfiguration, revatalisation, review and re-invention of its federal principle.

Many Nigerians from the South believe that the meeting of the Southern governors should be sustained. The unity of the South should not be compromised. The South, comprising Igbo, Yoruba and Itsekiri, Ibibio, Urhobo, Efik, Ijaw, Egun, Ekwere and other ethnic groups, are not more divided than the North, which is made up of Hausa/Fulani, Kanuri, Jukun, Idoma, Tiv, Igala, Ebira and some Yoruba. But, while the Northern governors have been meeting to protect their wider regional interest, their Southern counterparts were complacent.

Southern governors should always engage in a peer review by trying to compare notes and tap from the experience of their colleagues in terms of revenue generation, investment drive, blue-print for industrialisation, prudent spending, prioritization, transparency, good governance, conflict management, security and succession.

However, these items cannot displace the core item, which is the debate on the basis for mutual co-existence in a highly diverse and fragmented country remarkable for ethnic and religious sentiments.

The governors of the Southwest should be conscious of the history of their regions. They should know that the activities of their illustrious founding fathers-Dr. Nnamidi Azikiwe, Dr. Michael Okpara, Chief Dennis Osadebey and Chief Obafemi Awolowo-led to what historians termed development gap between the North and South in the days of regionalism.

Early in the life of the Fourth Republic, the late Chief Bola Ige urged Southern leaders to cooperate and survive, or sink together. He said the cracks in the South may have strengthened the North to lord it over the South. Ige, former governor of Oyo State, did not advocate for war or division but Southern unity and collective interest articulation. The memory of the friction between Zik and Awo should fade through greater integration among the three Southern geo-political zones.

Like their northern counterparts, Southern governors are operating under the yoke of the unitary system. Had Nigeria been run as a true nation-state, the prospects of survival would have been hinged on their diverse natural endowment. There is no state that is not blessed by nature. But the culture of over-centralisation and the emotional attachment to oil, which became the mainstream of the economy, created a culture of laziness, which prevented the Federal Government and states from exploring alternative sources of income.

Indeed, lack of diversification has become a national albatross, following the crash of oil prices.

If Nigeria is restructured, will the states suffer? The 17 Southern states, just like the remaining 19 northern states, are offshoots of the regions that controlled their resources and remitted taxes to the Federal Government in the days of regional prosperity and healthy competition. The question is: why should the Federal Government insist on the sole proprietorship of the natural resources domiciled in the states through a curious Exclusive List?

Can the states own, exploit, and generate revenue from their respective resources, including crude oil, solid minerals and Value Added Tax (VAT), and pay taxes to the Federal Government?

The politics of distribution is troubling Nigeria. Currently, Item 39 of the Exclusive Legislative List gives the Federal Government the sole and exclusive power to legislate on mines, minerals, including oil fields, oil mining, and natural gas. Why can’t the Federal Government devolve to the states some of these powers? Despite the political tension of the First Republic, federalism worked. The regions enjoyed a semi-autonomous status, with their regional constitutions, governance structure and coat of arms.

A key element of federalism is the devolution of powers. That is why many stakeholders want the Federal Government to shed weight by transferring some items in the Exclusive Legislative List to the Concurrent List to enable states have direct responsibility on state police, community police and prisons.

The compelling argument for state police is local peculiarity and diversity. If a Kanuri is posted to Southwest as a policeman, he will find himself in a strange environment.