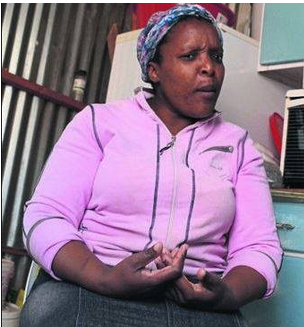 Spread the love
The death of a woman has left her family in pains after she was stripped and murdered for dumping her boyfriend. According to the family of the deceased, the physical abuse on her went on for many years until early this year, when the 45-year-old decided that she was tired of the abuse and dumped him.
She ended up paying with her life for the decision she made. Her family told Daily Sun that Dipuo Makwakwa’s boyfriend would beat her up, strip off her clothes and make her walk home naked.
That seemed to have happened too when her naked body was found in a field last Monday in South Africa. She had been stripped naked, beaten, stabbed and had acid poured on her.
Dipuo’s sister, Dineo (38), from Mohlakeng on the West Rand said her sister didn’t deserve to die like this. She said after Dipuo broke up with her ex, he started stalking her and threatened to kill her.
Dineo said he even came to them, begging Dipuo to take him back. She said the family advised Dipuo to get a protection order, which she duly did.

After hearing about the incident on Monday, the ex-boyfriend’s family hunted him down and handed him over to police. A family representative said: “We couldn’t sit and fold our hands because Dipuo was like our sister too. “We found him at a hostel and took him to the police.”

The Makwakwa family commended the man’s family for what they did.
Dipuo’s brother, Mpho (47), said:- “We just wish that boy had just forgotten about Dipuo and let her move on with her life. “There was no need to kill her.”Mpho said they hoped her alleged killer would receive a harsh sentence.
Krugersdorp police spokeswoman Sergeant Tshepiso Mashele confirmed that a suspect was arrested. “A murder case has been opened for investigation. “The suspect is in hospital under police guard after sustaining a burn wound from acid,” said Mashele.
Share