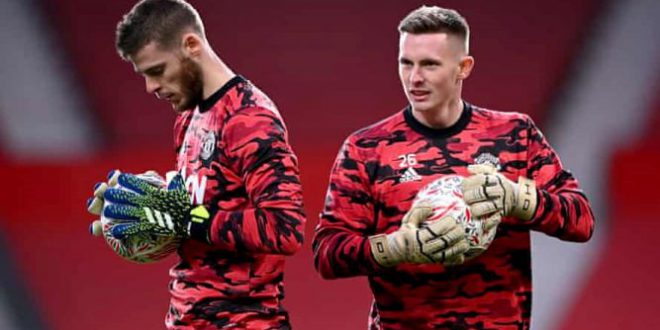 Ole Gunnar Solskjær has made clear to David de Gea that he faces a fight to remain Manchester United’s No 1 goalkeeper and that he should expect to share that duty with Dean Henderson for the remainder of the season at least.

De Gea has not featured for United since the goalless draw at Chelsea on 28 February having returned to Spain for the birth of his first child. Henderson has started United’s past six games and, bar the mistake that led to Milan’s late equaliser in their Europa League last-16 first leg, the 24-year-old has impressed. De Gea has watched Henderson’s past two displays – in the victorious return tie with Milan on 18 March and in the FA Cup defeat by Leicester three days later – from the bench, and although he may return to the starting lineup for Sunday’s Premier League visit of Brighton he is, Solskjær insists, no longer assured of his place.

“I have the option of two top goalkeepers and of course both of them want to play as much as possible – that will be decided on merit,” said United’s manager. “Hopefully we have nine plus five games to go, as we want to go all the way in the Europa League, so I’m sure you’ll see both of them play in goal.”

Were Solskjær to select Henderson over De Gea on Sunday it would be a significant move given De Gea had been United’s first choice in the Premier League before paternity leave. It would also potentially signal a long-term changing of the guard, something on the cards since Henderson returned from his loan at Sheffield United in August at a point when De Gea’s future was being questioned following a string of less-than-convincing displays. He has responded well but, increasingly, it feels as if this season will be his last at United. If so, De Gea will have completed a decade’s service, a period in which he was named United supporters’ player of the year on a record four occasions.

“Both [goalkeepers] know we value them highly,” Solskjær said. “It’s a difficult decision to leave one of them out.”

The game against Brighton will be United’s first in the league for three weeks and a chance to bounce back from their Cup exit. It will not be easy, however, given they face a side who have won their past two fixtures and performed well throughout the season. The hosts may be without Anthony Martial, Marcus Rashford, and Mason Greenwood because of injury.

“We respect the way [they Brighton] play,” said Solskjær. “We know we have to be at our best because you have to work really hard to get the ball off them.”

Solskjær refused to be drawn on United’s interest in Erling Haaland but he was more than happy to back the club’s See Red campaign, which was launched on Friday and encourages fans to report racism and other hate crimes to a new online system. The move is largely in response to the abuse of footballers on social media, with a number of United players, including Martial and Fred, targeted in recent weeks.

“I’m proud that as a club we keep campaigning and this is certainly one that will have an impact,” said Solskjær. “It’s time now that action takes over words.”