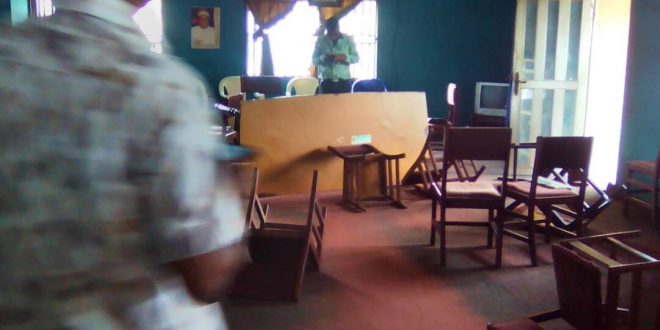 Information reaching ionigeria indicates that the soldiers stationed in Abia State may have lost control of their actions.

This is as some of the soldiers attacked the National Union of Journalist [NUJ] secretariat along Aba road in Uumahia, Abia State destroying properties and injuring some of the press officers inside the office.

According to eyewitness reports, the soldiers who were stationed nearby the secretariat claimed they were being filmed/photographed by the press officers inside the secretariat. When the soldiers barged into the secretariat, they grabbed all cameras and film equipment belonging to the reporters and began damaging the properties that included computers and other accessories. They also manhandled some of the reporters.

This action on the part of the soldiers follows an attack on the members of Indigenous Peoples of Biafra [IPOB] a few days ago when the police claimed the military men were only testing their newly repaired amoured vehicle. Several injuries were reported during the attack. Other reports indicate up to five people lost their lives.

Previous Bolaji Abdullahi’s “On A Platter Of Gold” A Book On Goodluck Jonathan
Next 3 Boko Haram Members Arrested In Ajao Estate, Isolo, Lagos