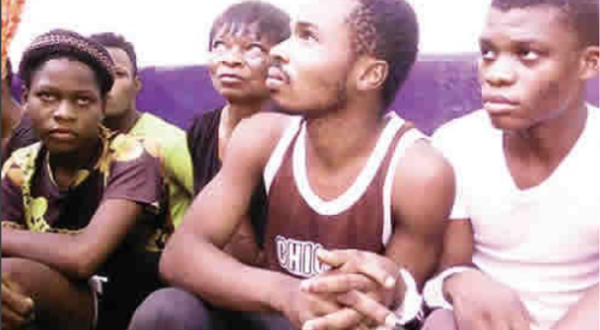 A 23-year-old father, Kingsley Eze, has said that he sold his five months old baby boy for N250,000 due to lack of money to raise and train him, following his arrest in Abia State.

Eze said he had agreed with his girlfriend to sell the baby before luck ran out on them. Eze said, “I am a mechanic. I was arrested for child trafficking. The baby is mine; my fiancee gave birth to him.

We decided to sell the baby because I wasn’t making enough money to take care of him and the mother.”

According to Punchng, another child trafficking suspect, Chinkata Chikezie, who reportedly sold his five-year-old son for an undisclosed amount, was also arrested. Chikezie’s wife, one Glory, had reported to the police that she woke up on October 16, 2017, and discovered that her baby was missing and the door to their room was open.

When the villagers sighted her husband (Chikezie) returning home that morning, they handed him over to the police for questioning. During interrogation, Chikezie confessed that he sold his son in connivance with one Kelechi John and Chikezie Ubabuike.
Police operatives attached to the division swung into action, arrested the other suspects, and recovered the child.