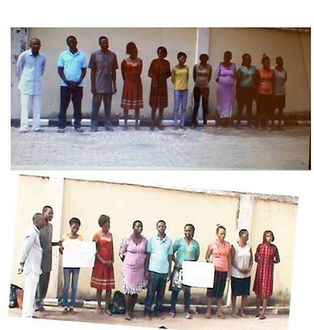 A 30 Years old woman identified as Rosemary Okafor, has confessed that she sold her last child ( A new born baby) to enable her use the money to train her older children.

Okafor made the confession while men of the National Agency for the Prohibition of Trafficking  in Persons (NAPTIP) busted and arrested 11 persons for suspected child trafficking, abduction and sale of children.

They were arrested in different parts of Anambra state in a combined operation carried out with the support of the operatives of the Directorate of the State Services (DSS).

The suspects comprising 8 women and 3 men were said to have belonged to a criminal syndicate that specialized in kidnapping and sale of babies across the country notably the States of the South-East, Lagos and Abuja.

Okafor confessed that she sold her baby to a woman simply identified as Madam Pink at the cost of N350, 000.

Three children whose ages range from 8 months to 4 years were recovered during the operation while scores of other children believed to have been trafficked by the gang are yet to be found.

The parents of the 8 month old child are yet to be traced while the 2 years old child whose 4 year old brother is yet to be recovered has been identified by her parents.

She was stolen from Okpoko in Anambra State and was recovered in Lagos.