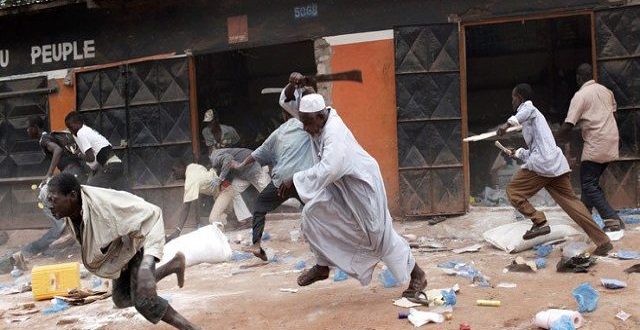 According to reports, five of the victims are natives of Mayo-Lope, Lau local government area  in the state where scores were massacred and several others injured by herdsmen few days ago.

The other victim, whose name was given as Ethan Nast, is said to be a resident of Damsa local government area of Adamawa State.

The victims were in the market to sell their cows when they were attacked ny the suspected herdsmen and their cash was carted away.

“They were trailed by their assailants all the way from Mayo-Lope where they set off, to   Iware where they were hacked to death at the market,” an eyewitness said

Four bodies were counted immediately. One of the victims who was identified as Baban Lumu, a cement dealer from Mayo-Lope, who was fleeing from his attackers to a nearby police outpost, but no sooner had he arrived the police station than he died of the multiple cuts. Police recovered N80,050 from him. Another victim died in the hospital.

The injured persons at the scene of the attack were taken to the Federal Medical Centre (FMC) Jalingo, for treatment but one of them died in the hospital of “excess bleeding.”

The six bodies have been deposited at the FMC’s morgue.

Confirming the attack, the state police command spokesperson, David Misal, said the suspected herdsmen believed that the cows brought to the market for sale were all stolen from their members.

“Six people were killed at Iware market by yet-to-be-identified persons. Some people brought cows to the market for sale but were attacked and killed when information got to Fulanis that the cows were stolen ones. We are trying to find out the perpetrators who took the law into their hands, instead of reporting to us, if really a case of cattle rustling was established,” he said.

Previous Video: See How To Identify Real SARS Officers
Next Sad!!! Legendary Nigerian Boxer, Okorodudu Cries Out, Says “I Am Dying Of Hunger”