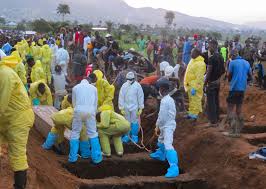 Over 300 victims of a mudslide that devastated a town on the outskirts of Freetown, Sierra Leone were buried on Thursday. The victims were laid to rest in the town of Waterloo, where victims of the Ebola epidemic were buried.

An estimated 400 people were killed on Monday when a hillside collapsed in the mountainous town of Regent. The massive landslide, caused by severe rain, buried at least one hundred homes.

The Red Cross said on Wednesday that there are roughly 600 people still missing, suggesting that the death toll would likely rise. Some 9,000 people were affected by the disaster.

The United Nations warned that another mudslide is possible due to the continuous rain which is not expected to stop till the end of the month. Sierra Leone Health facilities are struggling to respond to the tragedy, as there are not enough doctors and medical workers to adequately treat all the victims, living or dead.

Rescue workers are also overwhelmed as they continue to search for victims. The Sierra Leone government is therefore seeking outside assistance from the United Nations, nonprofit relief organizations, and foreign governments.

The small West African country is still recovering from the Ebola crisis that killed 4,000 people from 2014-2016.

Previous No Restructuring, No 2019 Election –Southern Leaders
Next Suspected Thief Arrested For Robbery Shortly After Finishing A 1-Yr Jail Term For A Similar Offense