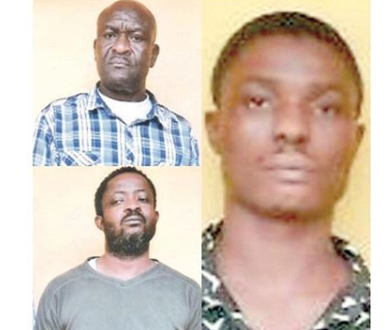 Stanley Erujere, a kidnap kingpin serving 21 years jail term in Okere Prisons, Warri, Delta State, has been rearrested alongside two prison warders who escorted him to a hotel for a meetings with his gang members.

32-year-old Erujere was arrested by police officers inside Omaks Hotel, Warri, alongside Oveto, the warder who escorted him from the prison to the hotel.

The pair later indicted DCIP Nketan, as the man who provided them with the pass that facilitated their exit from the prison.

It was gathered that each time the kingpin went to the hotel and came back to the prison yard, he rewarded Nketan and Oveto with N3,000 and N2,000 respectively.

The kingpin had gone out of the prison yard three times to hold meetings with his gang at the hotel which culminated into three kidnappings in Warri and Asaba respectively before detectives busted the gang on June 22, 2018.

Previous PACT Debacle: Reno Blasts Moghalu, Durotoye Says They Are Not Better Than Those They Condemn
Next Sad: Former NDDC Boss, Son And Police Orderly Burnt To Death In Bayelsa