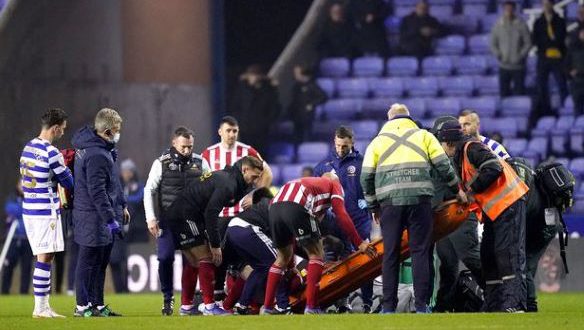 Fleck is placed on a stretcher ( Image: PA)

Sheffield United midfielder John Fleck was taken off on a stretcher after a serious-looking incident in the second half of Tuesday night’s Championship game at Reading.

With the Blades leading 1-0, Fleck went down to the ground apparently unchallenged – and his team-mates quickly indicated for the medics to run on the pitch to tend to him.

Fleck, 30, appeared to receive emergency attention before, after a 10-minute delay, he was taken off on a stretcher and out of the ground to a waiting ambulance.

The Royal Berkshire Hospital is a short distance from the SCL Stadium.

United shortly after the episode released an update that was cautiously update, confirming that Fleck was conscious at the time of leaving the stadium.

“Play is yet to restart but the Scottish midfielder is on his feet and receiving further medical care.

“Fleck leaves the field on a stretcher after receiving urgent medical care.

“Our thoughts are with you, Flecky!”

The club added in a tweet after the match: “3 points for the Blades. More importantly, John Fleck was conscious when he left the stadium via the ambulance gate.

“We’ll provide supporters with a further update once known.

Blades boss Slavisa Jokanovic confirmed after the match: “He is in hospital, he is conscious and he asked for the result.

“Hopefully he will be okay.

“He is safe, in good hands and we pray that everything will be okay.”

A statement from the South Yorkshire Police confirmed: “From what we are being told, John Fleck is alert and communicating with emergency services staff following the horrible incident.

“Fingers crossed for a full recovery.”

The incident happened midway through the second half with Fleck collapsing to the ground without any other player in the near vicinity.

That led to players from both teams frantically gesturing to the sidelines for medical assistance to be rushed onto the pitch to attend to the Scottish player.

Fleck was immediately attended to and received oxygen on the pitch, before being assisted off the pitch and taken into the back of an ambulance, whereby he was then rushed to the nearby Royal Berkshire Hospital.

Fleck’s teammate and captain Billy Sharp helped carry the stretcher that took the 30-year-old off the pitch, as everyone’s thoughts turned away from the outcome of the match and towards the player’s health.

As the United player was carried from the pitch, all sides of Reading’s Madesjki Stadium rose to their feet to applaud Fleck from the field of play.

Conor Hourihane replaced Fleck in the midfield for the Blades, who held on to a 1-0 victory thanks to Jayden Bogle’s strike.