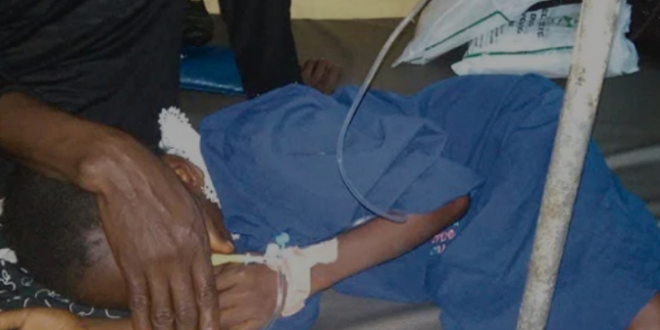 A 75-year old man, Pa Gabriel Abrapiribor has landed in trouble after having sex with an 11-year old girl at St Agnes Primary School, Maryland area of Lagos.

The 75-year old was said to have lured the victim into the school and defiled her before he was eventually caught. The police did not state how the incident took place inside the school premises despite the security put in place the school.

Police sources said that the suspect lured the victim into the place, removed her pant and penetrated her before he allowed her to go.

The victim went home and reported what happened to her parents who then reported the incident to the Gender Section of the Police Command, Lagos.

He was arrested and taken to the Command for interrogation; he was said to have admitted penetrating her but claimed that he did not force her as such it was not rape.

However, the police found him culpable and charged him before the Ogba Magistrates court, Lagos for the offence.

The prosecutor, Mr. Christopher Donny, did not oppose his being granted bail. But the court denied him bail.

The Presiding Magistrate, Mr. Peter Nwaka ordered him to be remanded in prison custody and ordered the prosecutor to duplicate the file and send to DPP.

It was gathered that if the defendant was tried and found guilty, he may have to spend up to 25 years in prison for the offence he committed.

Previous Frustrated Man Stabs His Lesbian Wife To Death For Making Fun Of His Small “Business”
Next Sad: Former Commissioner Falls Off Balcony, Dies In Bayelsa