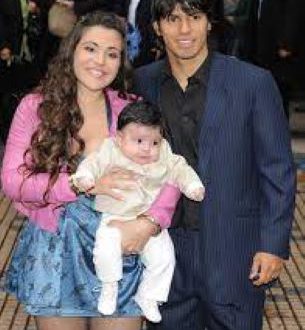 Charles Igbinidu May 24, 2021 Life and Style Leave a comment

Sergio Aguero is set to leave the Premier League as one of the world’s most eligible bachelors.

The Argentinian striker, 32, is on the verge of signing for Barcelona after netting two goals for Manchester City in the 5-0 rout of Everton on the final day of the season.

Not only will his departure from the Etihad break fans’ hearts, there are a few exes that may also be devastated he’s going.

The forward, who broke Wayne Rooney’s scoring record with his double taking him to 184 Premier League goals, has been pictured with a bevy of beautiful ladies over the years.

Here are some of the most notable, including his current squeeze, model Sofia Calzetti.

AGUERO married into footballing royalty when he got together with late Argentina legend Diego Maradona’s youngest daughter in 2008, after being introduced by the icon himself.

They had baby boy Benjamin together in February 2009 when Aguero was still leading the front line for Atletico Madrid.

But things turned sour and they split in 2012, with some reports in their native Argentina claiming the pair argued over Giannina’s alleged ‘party lifestyle’.

The Hand of God legend’s daughter – who regularly posts photos of her shapely bum online – confirmed their break-up on Twitter, saying they had ‘separated’ after a ‘difficult year with a lot of changes’.

And it seemed like her followers took her side, with one writing: “Aguero doesn’t deserve you. He’s stupid and an idiot.”

But Giannina defended her ex, replying: “Don’t say that, he’s the father of my son and he’s nothing like what you say he is.

“When a couple finish it’s both their faults.”

But Maradona – who passed away after heart failure in November aged 60 – saw it differently, to say the least.

Speaking of his former son-in-law, he called him a ‘wimp who I don’t even want to name’.

And he blacked out a photo of Aguero holding Benjamin in a snap from inside his Dubai home with lawyer Matias Morla in February 2019.

THE striker moved on from Giannina pretty quickly by hooking up with popular Argentinian singer Karina – known as the Little Princess – just months after his marriage ended.

But his past could not escape him, with his new flame and Giannina having a Twitter spat.

Aguero had to act as peacemaker when it was claimed son Benjamin had been insulted by Karina’s daughter, Sol, from a previous relationship.

Karina raged: “If you’ve got something to say about my daughter ring me and tell me.

“I can put up with you trying to make me look back but don’t take it out on my daughter.”

IF you’re pulling up to a swanky Los Angeles nightclub in a £140,000 4×4, then you should not do so without an entourage.

Aguero certainly didn’t when he rocked up to the Warwick with heavily tattooed Instagram model Zoe and pals back in 2018.

It is unknown if she and Aguero ever attempted to get serious.

But it appears doubtful given that she reportedly jetted back to Verona in her native Italy after the night out.

Back in March 2019, Aguero was said to have charmed stunning reality TV star Taylor Ward.

Taylor appeared on Real Housewives of Cheshire, and is famously the daughter of former Premier League star Ashley Ward.

She was also the ex-girlfriend of Katie Price’s former lover, Kris Boyson.

But their relationship fizzled out, and Aguero soon moved on.

It was his first confirmed girlfriend since Tejeda, and they went Instagram official with a series of cute pictures on social media in 2019.

Aguero whisked her to Miami at the tail-end of last summer, driving the gorgeous blonde in a blue McLaren Spider worth £166,000.

They were even spied snogging in the Bahamas as their love affair continued.

And she helped Aguero enjoy a Peaky Blinders-themed 31st birthday party, and they both shared snaps on social media.

The picture-perfect couple enjoyed a tourist trip up The Shard while Aguero was rehabbing after the nasty knee injury he suffered in July.

For Aguero, it seems that she’s a keeper… but will he take to Barcelona?

Charles Igbinidu is a Public Relations practitioner in Lagos, Nigeria
@https://twitter.com/ionigeria
Previous Arsenal would have finished FOURTH ahead of Chelsea this season if there was no VAR
Next Mali soldiers detain president, prime minister and defence minister after cabinet reshuffle