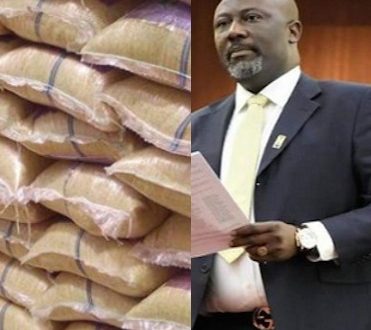 Members of the Senate have donated 1,280 bags of rice to the unpaid workers in the Kogi State civil service.

The gesture came after Senator Dino Melaye who represents Kogi Wests senatorial district in the Senate, brought the plight of the workers who are being owed many months salaries, to the floor of the house yesterday October 25th. Dino announced the kind gesture when he addressed members of the National Assembly press corp.

“Today, I drew the attention of the Senate of the Federal Republic of Nigeria to the plight of civil servants in my native Kogi State following the recent disturbing reports of deaths by suicide and inability to pay medical bills by some workers. I’m happy to report to you that my colleagues in the Senate have immediately responded by donating bags of rice and other essential items to the workers in order to cushion the biting effects of non-payment of their salaries by the Kogi State government. The donation, which amounted to 1,280 bags of rice as of today, and others that will follow later, will be handed over to the Kogi State chapter of the Nigeria Labour Congress for onward distribution to the most vulnerable workers who need immediate assistance.”