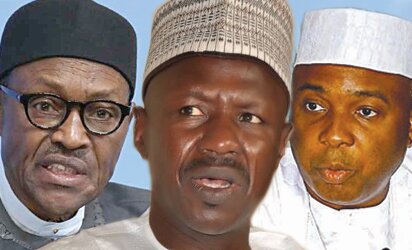 It would be recalled that President Buhari had last week nominated 27 persons for appointment as Resident Electoral Commissioners of INEC out of which two were rejected by the Senate over corruption allegation and old age.

Recall also that, twice, the Senate had rejected to confirm Mr. Magu as the substantive boss of the anti-graft agency following reports from the Department of States Services, DSS, that Mr. Magu failed integrity test and as such, is unfit to head the EFCC.

Although much speculations had sprung up after Magu’s rejection for the second time that President Buhari ought to substitute Mr. Magu with another nominee for the position, the President has rather not taken any action to that effect.

Recall also that The Comptroller-General of the Nigerian Customs Service, Mr. Hameed Ali had refused to honour Senate’s invitation to explain a policy of the Customs which plans to impose duty on old cars in Nigeria.

Recall also that the Secretary to the Government of the Federation, Mr. Babachir Lawal had equally refused to honour Senate’s invitation to explain his role in an alleged grass cutting fraud involving him.

But in a form of protest, the Senate, during Tuesday’s plenary, stepped down the confirmation of the REC officers, saying some members of the executive arm of the government want to bring its hallowed chambers to ridicule.

“If the Senate is ridiculed our institution has been ridiculed, we will try as much as possible to promote this institution,” said Senator Anyanwu.