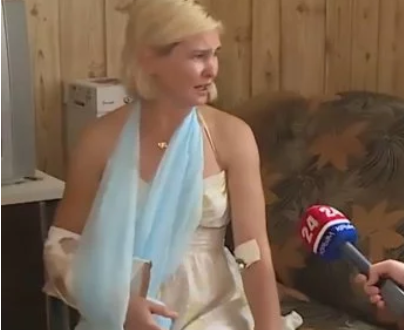 A woman has been mauled by a lion after she got into its enclosure to pose for a photo with the big cat.

Olga Solomina, 46, was enjoying a day out at the Taygan safari park in Crimea, Ukraine, when she got into the lion’s enclosure.

She posed for a picture next to an apparently placid lion but, according to reports, got herself into trouble when she placed her hand on the ferocious feline’s mane.

The enraged lion launched into a vicious attack, mauling Ms Solomina and trying to drag her her away by the arm. Luckily, zoo director Oleg Zubkov was nearby and managed to save Ms Solomina by chasing the lion away.

He then  got Ms Solomina into a nearby vehicle and drove her to safety.

But incredibly, Ms Solomina then says Mr Zubkov refused to call her an ambulance, ordered a vet to treat her and gave her alcohol to soothe the pain.

Ms Solomina told the Metro: ‘I squatted down and put my hand on the lion as I was told. Next moment it grasped my arm and dragged me like a rag doll,’ said Ms Solomina.‘The other lions jumped to their feet. I closed my eyes in fear waiting to be torn apart by  the pride. It lasted several seconds that felt like eternity for me.’

Since the accident Ms Solomina and Mr Zubkov have been bickering about who was to blame for the incident, and about the way Ms Solomina was treated afterwards.

Ms Solomina was eventually taken to the hospital the next day where doctors found she had a serious infection from the lion’s bite.

Now, the safari park is holding out on the 1,000,000 RUB (£12,000) compensation Ms Solomina is apparently demanding, saying she signed a disclaimer.