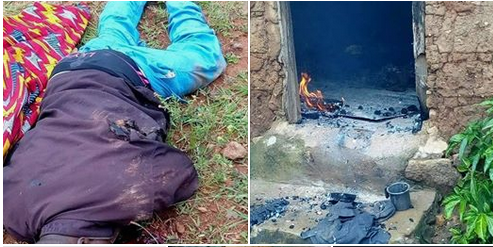 No fewer than 120 persons were weekend killed in several villages in Barkin Ladi, Mangu and Riyom local government areas of Plateau State in fresh attacks by gunmen suspected to be herdsmen, while over 200 others sustained gunshot injuries.

Pictured is a lucky woman who escaped death and survived the attack by the assailants. She is currently at an undisclosed hospital where she is receiving treatment.

However, Commander of the Special Military Task Force, Major General Anthony Atolagbe, last night confirmed that 56 persons were killed.Major-General Atolagbe, who spoke from the bush where he was directing operations to apprehend the perpetrators, also said three of the killers had been arrested, adding that they confessed to participating in the killing.

“The suspected killers have been giving useful information about others involved in the killings and their hideouts. We are going all out for them.

Also, troops have been deployed to ensure normalcy is restored,” he said.The scale of destruction in Plateau, which also led to burning of houses, compelled the state government to declare a dawn-to-dusk curfew in the affected local government areas to stave off further killings.