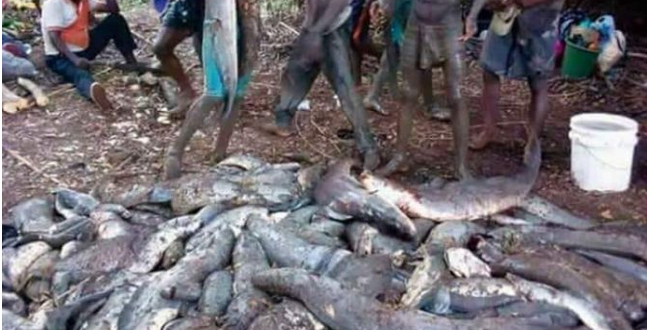 See How Flood Brought Wealth For These Villagers In Bayelsa

The villagers who were over joyous  – posed with the big catch, with plans to sell them.

Meanwhile, some affected residents along the Epie Creek in Yenagoa, Bayelsa State,  have bemoaned their loss and the discomfort caused them by floods that submerged their houses.

Ity was scooped that that the impact of flooding caused by the overflow of the waters from Taylor  Creek, tributaries of Orashi and Niger rivers, dealt a devastating blow to the residents.

It was also gathered that the water levels rose beyond tolerable limits and thereby wreaked havoc on houses, the environment and properties of some residents.

Due to the development, some residents were said to have temporarily relocated from their homes to seek refuge in other places.