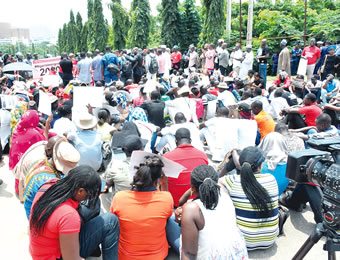 Security operatives drawn from the Nigeria Police Force, the Nigeria Security and Civil Defence Corps, NSCDC, as well as the Department of State Services, DSS, barred the Bring Back Our Girls (BBOG) group from gaining access to the Three Arms Zone, where the Presidential Villa is located, on Monday.

As part of the group’s 14 days campaign to pressurise the government to intensify efforts to rescue the girls taken away from their school on April 14 2014, the group had planned a protest to the Presidential Villa. However, a massive blockade of the road to the Three Arms zone ensured that the campaign could not get to the villa.

The protest was jointly led by Oby Ezekwesili and Aisha Yesufu while the police detachment was led by CSP Chuks Obasi.

Both Ezekwesili and CSP Obasi were involved in a shouting match as the officer insisted that the protesters would not cross the human barricade put together by the security operatives.

In the course of the confrontation, Ezekwesili told the security operatives that the group was a peaceful one.

She said: “For many years, we have been advocating, we have never engaged in anarchy.”

She also warned the leader of the police team to stop pointing his fingers at her while addressing her.

Replying, Obasi said: “Well, I have my mandate and my mandate is to ensure that a protest match does not assume a violent dimension.”

Some members of the group who spoke expressed their dissatisfaction with the way and manner the President Muhammadu Buhari led administration was handling the kidnapped Chibok girls’ case.

A member of the campaign and who is also from ‎the Chibok community, Hoses Tsambido said BBOG group had voted the All Progressives Congress as against its previous votes in 2011 instead of the Peoples Democratic Party.

He said:”We were promised that the president would visit Sambisa, after becoming president. We were also told that within two weeks our girls would be rescued.

“But over one year now, there is no tangible statement about our girls. The presidency has stated instead that it is confused.

“They told us that our girls seen in the latest video was merely an arrangement. No one has spoken to the family of any of the Chibok girls since the last video was released, by the terrorists. We regret our votes. We regret it.”

The BBOG said the Buhari administration no longer had any valid excuse for not resuing the girls.

“No more excuses,” they shouted.