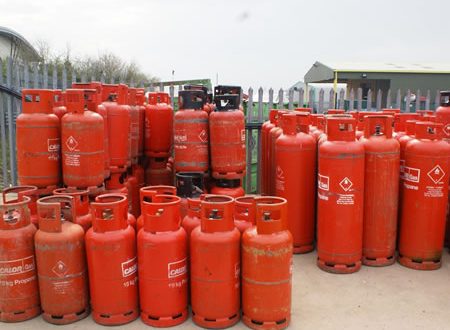 A 25-year-old security guard, Kelvin Egar, who allegedly stole a cooking gas cylinder worth N40,000, on Thursday appeared before an Ikeja Magistrates’ Court.

Egar, who lives in Ogba area of Lagos, is facing a charge of stealing.

According to the Police Prosecutor, Sgt. Adetutu Salusi, the accused committed the offence on March 9 at No. 15, Ayo Alabi St., Oke-Ira, Ogba.

Salusi said the accused, who is a security guard in the compound of the complainant, Ibironke Akife, stole the cooking gas cylinder
from where it was kept.

“Akife discovered that the cylinder had been stolen and she later found out that it was Egar, who stole it and handed him over to the
police,” he said.

The offence contravened Sections 287 of the Criminal Law of Lagos State, 2015.

The News Agency of Nigeria (NAN) reports that Section 287 stipulates a three-year jail term for offenders.

In her ruling, the Magistrate, Mrs Y. O. Ekogbulu, granted the accused bail in the sum of N30, 000 with two sureties in like sum and adjourned the case until April 12 for the mention.